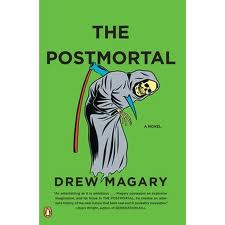 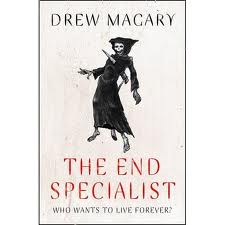 (Note, this book was published under the title The End Specialist in the UK)

This is John Farrell's account of the years during which the cure for aging is legalized.  It is discovered several years after the cure (and most documentation regarding that period) has been destroyed.  This frame story gives the novel a similar feel to Max Brooks' World War Z.  The reader knows how the book will end, and wants - desperately - to understand how the world came to this horrible place.  And don't let the cover fool you, this book has more in common with Cormac McCarthy's The Road than it does with Christopher Moore's humorous satires.

Farrell is 29 when he gets the cure, and for the next few decades parties and enjoys life.  He's a lawyer when the idea of cycle marriages (which end after 40 years) become the vogue and is often at the wrong place at the wrong time when it comes to protests and reactionary thinking.  Because not everyone thinks the cure is a good thing.  And the novel is VERY clear that the wrong place is everywhere.  Farrell's experiences are not unique.

From protesters who want the cure legalized, pro-death terrorists, trolls who decide the internet isn't good enough for mischief - they want to maim those who are crowding their space-, to cure hotels in Vegas and the very real consequences of a population that can still catch diseases and die, but can't age beyond their treatment dates, this book covers a lot of philosophical issues.  It's impressive that Magary manages to not pass judgement on his characters, showing the different sides of the cure and how humans react to it - or even the promise of it.  On occasion Farrell will do roundups with internet links to news articles that mention how the rest of the world is coping with the cure: China bans it, Russia forces its military personnel to get it.  He'll also add interviews with pertinent players, like the cure's inventor, or pamphlets, like the one handed out by the Church of Man.

The cure affects every aspect of life, and as the book progresses, the dry humour of the first section slowly vanishes, as Farrell realizes that a life of partying gets old, even if his body doesn't.  And when he decides to do something worthwhile with his life, fate steps in.

Magary uses expressions and new language with no explanations (like plug-ins for electric cars), which adds authenticity to his well realized future.

Postmortal is a book about the best and worst aspects of humankind, a novel that will make you question life, the universe and everything.  Ultimately, it's a novel about hope, and how we can't live without it.
Email ThisBlogThis!Share to TwitterShare to FacebookShare to Pinterest
Posted by Jessica Strider at 21:07