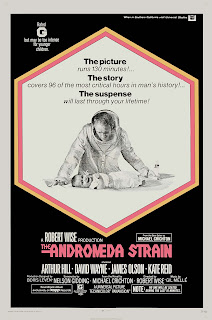 A satellite crashes near a village in New Mexico, after which all but two of the inhabitants die.  The site is quarantined and the satellite and survivors taken to a special laboratory designed to deal with extraterrestrial diseases.

This is definite hard SF, with a scientifically possible premise that follows scientific procedures to determine what the satellite brought to earth and how to counteract its effects.

I mention that it's slow in the cons as I know a lot of people don't like slow SF films.  This is not a film with action and explosions.  It's a movie designed to provoke thought.  I imagine the effects were quite good at the time, though it's hard to see their 'state-of-the-art' computers without cringing.

There are some interesting twists as the scientists learn more about the space germ.  Fans of Michael Crichton (author of the novel the movie was based on) will note his signature pattern of introducing a series of small crises that balloon into giant problems (as seen in Westworld and Jurassic Park to name two).

If you liked Moon, this might be a good film to pick up.

Email ThisBlogThis!Share to TwitterShare to FacebookShare to Pinterest
Posted by Jessica Strider at 13:13