This post is to showcase some of the amazing booths that were set up. I didn't photograph the major players (Random House, Penguin, etc.) as they didn't have their genre imprints in evidence. Instead you'll see some of the smaller presses that specialize in Sci-Fi and Fantasy. If you've never heard of them, then check out the links at the side of this blog and pay them a visit. 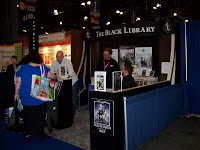 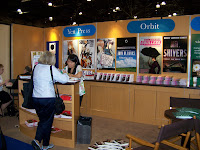 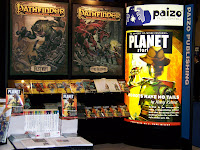 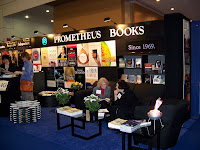 BL Publishing - publishes mostly War Hammer and other gaming related books. They're currently selling their Solaris imprint so they can focus on thier other lines. Let's hope the new owner of Solaris does as good a job as BL has done with it. (Solaris publishes such authors as Gail Z. Martin, Emily Gee and Eric Brown.)

Orbit is the 2 year old SF imprint of Hachette Book Group. They've come out of the gates with a truly remarkable line-up, which just keeps getting better. (Some of their authors: Brent Weeks, Brian Ruckley and Jeff Somers.)

Paizo books has been publishing a lot of pulp SF classics under their Planet Stories imprint. They've decided to put a more pulp look on their covers for future releases.

A few publishers that were not represented this year: Dorchester books (C.L. Wilson); Abaddon Books (a UK publisher that does series fiction: Afterblight Chronicles, Pax Britannia, Tomes of the Dead); Juno; Prime; Chaosium...

It's been a difficult year for publishing. Let's hope these smaller presses weather the times to bring us good reads in the future.
Email ThisBlogThis!Share to TwitterShare to FacebookShare to Pinterest
Posted by Jessica Strider at 14:39