As promised, Saturday and Sunday's rundown of BEA. 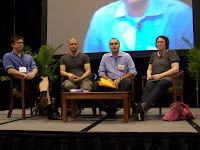 First came the Sci-Fi author discussion. Periodically through the day various authors and publishers gave presentations or had discussions. The SF panel was small (considering there were other SF authors attending the conference) but very interesting. The panelists were: John Ringo (Eye of the Storm), China Mieville (The City and the City), Chris Schluep (editor at Del Rey), and Kelly Link (short story writer and anthology editor). The conversation mostly centered on what the authors considered science fiction (or speculative fiction), whether it would ever become mainstream and what writers influenced their own writing. 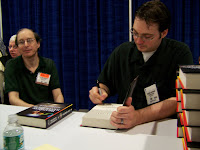 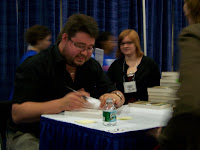 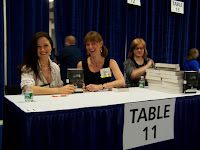 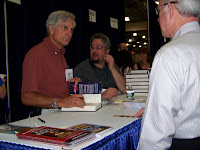 For signings, I met:
Brandon Sanderson - who's novel Warbreaker comes out this month. Look for an interview with him posted soon. The real buzz around Sanderson is the fact that he's been contracted to complete the Wheel of Time series by Robert Jordan. Looks like Jordan fans are lucky, Sanderson's not only a fan of the series, he's also put in a lot of background work (timelines, book mapping) to make sure his conclusion wraps everything up.

George Mann - An editor for BL Publishing, he also has time to edit anthologies for it's impring Solaris and write independent novels for other publishers. Here he is signing The Affinity Bridge from Tor, a steampunk which, it is reported, involves zombies.

Rhodi Hawk - Another debut author, whose book, A Twisted Ladder, is described as a Southern Gothic psychological thriller.

And last but not least, David Drake, who was at Toronto's SF conference Ad Astra as a Guest of Honour this year. He signed his upcoming book In the Stormy Red Sky.

There were more authors and books, of course, but unfortunately you can't mention everyone. :)
Email ThisBlogThis!Share to TwitterShare to FacebookShare to Pinterest
Posted by Jessica Strider at 12:23