I had the privilege of attending North America's premiere book industry event, BEA, in New York City. It consisted of one day of conference sessions followed by three days of hectic author signings, talking to publishing reps, getting new ideas and onto advance reading copy lists so that this blog can have more pre-publication buzz for upcoming books and authors.

There are definitely some great books to look out for. Now that my life has settled down a bit, I'll be reviewing more books again and paying more attention to this blog than I've been able to in the past few months.

Some of the people I had the pleasure of meeting on Friday (there are a lot, so I'll do a second post with Saturday and Sunday events): 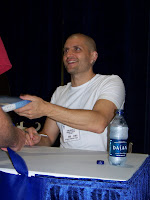 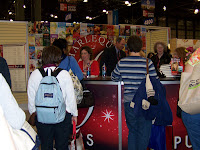 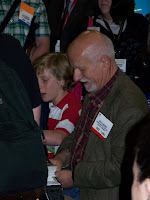 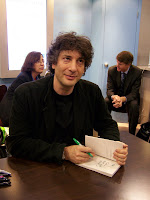 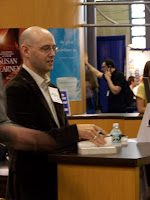 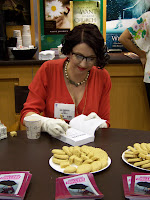 China Mieville - promoting The City and the City

Maria V. Snyder - Storm Glass, a book in the same world as her Study books, but following a new character.

Chris Claremont - the writer who got me combing every comic shop I could find for back issues of X-Men in high school and university. He signed copies of the "not for resale" promotional comic X-Men Forever. It consists of X-Men 1-3, first printed in 1991, when X-Factor and the X-Men joined forces to become the Blue and Gold teams. They was also the last 3 comics Claremont wrote for Marvel before moving on to other projects. He's going to be writing for them again, taking up directly where he left off, with this new joining of teams, and I for one and very excited about what this means for my favourtie comic book series.

Neil Gaiman - a surprise addition to the show's excellent line-up (he himself drew quite the line-up. I heard it went into the 500s, though getting there 45 minutes early made me #46.)

Brad Meltzer - signed copies of his new book, The Book of Lies. I still remember the first book of his I read, Dead Even. With it's husband and wife lawyer team working on opposite sides of the same case and both being blackmailed to win, it remains an easy hand sell and one of my favourite thrillers. He's written numerous DC comics as well, including the laudible Identity Crisis (the scene where Batman comforts Robin after a traumatic event is beautiful).

And last but not least, Gail Carriger was promoting her debut steampunk novel, Soulless with tea and cookies. This is a novel you'll be hearing more about. I'm only a quarter way through it but it's already one of the best books I've read this year.
Email ThisBlogThis!Share to TwitterShare to FacebookShare to Pinterest
Posted by Jessica Strider at 14:09

Hi there,
thank you so very much for the compliment. Also that's a lovely photo!
~ Gail

Thanks for writing such a fun, accessible novel. I'm very impressed at how well you 'show don't tell' with regards to setting and clothing. If you're still interested in doing an interview for me I'll put your name down for October (and send you the questions in September).