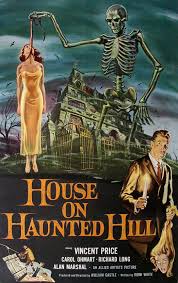 Millionaire Frederick Loren invites five strangers to join him and his wife for a party at a haunted house. If they survive the night, he’ll give them each $10 000.

Nora Manning, a secretary who wants the payout to help support her family, starts seeing things first. As her hysteria mounts and more terrifying things happen, a body is found and one of them is a murderer. Unless it’s the ghosts Mr. Pritchard (the house’s owner) insists are growing restless.

The movie starts off in an unusual manner, with a floating head of Mr. Pritchard explaining that the house is haunted. You then see Mr. Loren (played masterfully by Vincent Price)’s floating head introducing the five guests and his wife’s… strange sense of humour.

There are some genuinely tense moments, especially around Nora. Her screaming can get a bit unnerving, especially towards the end of the film.

The special effects are a bit on the cheesy side, which isn’t surprising given when the movie was made. The fake head was not very convincing.

On the whole I was impressed by this. If you haven’t seen it, it’s a fun horror film.
Email ThisBlogThis!Share to TwitterShare to FacebookShare to Pinterest
Posted by Jessica Strider at 13:32