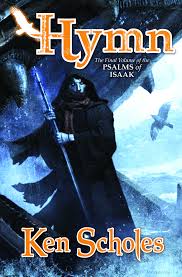 * This is the fifth and final Psalms of Isaak novel.

Picking up immediately where Requiem left off, Neb still needs the staff that Vlad Li Tam is using to terrorize the Y’Zirite Empire. Amyle D’Anjite has disappeared with her kin-dragon, on a mission to oppose Neb and the work he and Patronus are doing on the moon. Orius, Lysias, and Rudolfo work towards clearing the Named Lands of Y’Zirite soldiers. In the aftermath of the Final Dream, Winteria Bat Mardic begins preaching again. And mysterious allies finally show themselves.

This is the fifth and final book in the Psalms of Isaac series. I’ve long since given up trying to figure out what’s going to happen next in these books. There are so many surprises and major twists. A new group shows up in this book that ends up playing major roles along the various storylines.

While I sympathized with (and in some cases agreed with) a few of Vlad Li Tam’s actions, there hit a point where I agreed with other characters that he needed to be stopped. Jin Li Tam makes some surprising choices, and I was impressed with how Rudolfo dealt with his further losses.

At one point I was convinced that the author had forgotten about Lynnae, Jacob’s wet-nurse, and so was very happy that she turned up again.

The ending was fantastic. It came with more revelations about the people, and really tied off a lot of character threads. There were tears (in book and in person), and moments of joy.

If you like intrigue and haven’t picked these books up, you’re missing out.
Email ThisBlogThis!Share to TwitterShare to FacebookShare to Pinterest
Posted by Jessica Strider at 10:50