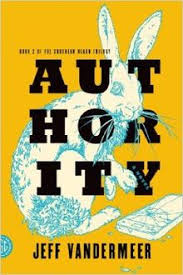 This is book two of the Southern Reach trilogy.

Cons: drawn out, boring at times

John Rodriguez, or Control, as he prefers to be called, is assigned as the new director of the Southern Reach project, the organization that oversees Area X. His assistant director, Grace, is openly hostile, while the remains of the science team are a helpful, if slightly unhinged bunch. Even his handler, the mysterious Voice, whom he phones reports in to daily, becomes antagonistic towards him as the days pass. Control isn’t sure how he’s supposed to bring the agency under control considering the opposition, especially when it becomes clear that secrets have been kept from him.

While it’s not essential to read book one in order to understand the majority of this book, the biologist does play a role and some information from Area X makes more sense if you have read that book.

I have mixed feelings about this book. I enjoyed getting to know Control and seeing the inner workings of the Southern Reach. While I understood some of Grace’s resistence to his being there, her continued undermining of his job started to grate on my nerves. Indeed, about 200 pages into the book I began to realize that I didn’t like any of the characters and no longer cared if Control succeeded in his mission.

I really wanted to learn more about the organization and Area X, but the book’s more interested in the inner working of Control and how the various revelations affect his mental state. While the mystery was interesting, so little was uncovered by the 3/4 mark and in such roundabout ways (scenes intercut with other scenes, making it hard at time to piece together what was present and what was past) that I found myself getting bored and no longer caring what was going on. Things picked up in the last third of the book, getting first fascinating, and then kind of boring again.

The book brings up a lot of new questions but doesn’t answer many. I’m wary of reading the third book for fear that no answers are coming.

Email ThisBlogThis!Share to TwitterShare to FacebookShare to Pinterest
Posted by Jessica Strider at 13:36