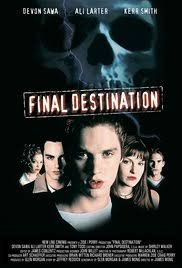 After boarding a plane for their school trip to Paris, one student has a horrible premonition that the plane is going to blow up. He and six other people are kicked off the flight only to watch the plane explode. One by one, the survivors start dying in bizarrely convoluted ways.

While the opening scenes are fairly melodramatic - focusing on normal things and making them seem spooky - the rest of the film is quite good. The acting was pretty good and I was impressed at how little gore there was.

I knew the basic premise going in but still found it interesting. The creepiest part of the film was wondering which of the random things the camera focused on would actually cause the killing blow.

This is not a film to watch if you’re scared of flying, but otherwise it was a fun time waster.

Email ThisBlogThis!Share to TwitterShare to FacebookShare to Pinterest
Posted by Jessica Strider at 13:35