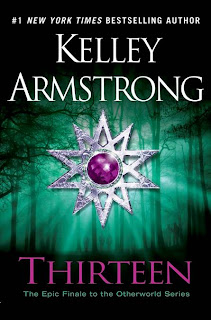 In 2001 Kelley Armstrong published Bitten, the first book of her Otherworld series.  Today, the final book in the series (book 13) is being released, appropriately titled Thirteen.

If you haven't read the series, now's the time to start.  Here's the synopsis for Bitten, to whet your appetite (taken from Armstrong's website):

Elena Michaels is the world’s only female werewolf. And she’s tired of it. Tired of a life spent hiding and protecting, a life where her most important job is hunting down rogue werewolves. Tired of a world that not only accepts the worst in her–her temper, her violence–but requires it. Worst of all, she realizes she’s growing content with that life, with being that person.

So she left the Pack and returned to Toronto where she’s trying to live as a human. When the Pack leader calls asking for her help fighting a sudden uprising, she only agrees because she owes him. Once this is over, she’ll be squared with the Pack and free to live life as a human. Which is what she wants. Really.

Email ThisBlogThis!Share to TwitterShare to FacebookShare to Pinterest
Posted by Jessica Strider at 11:21