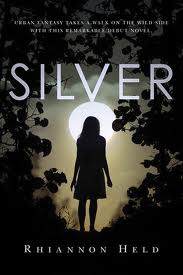 > What is Silver about?


Andrew Dare is a werewolf. He’s the enforcer for the Roanoke pack, and responsible for capturing or killing any Were intruders in Roanoke’s territory. But the lone Were he’s tracking doesn’t smell or act like anyone he’s ever encountered. And when he catches her, it doesn’t get any better. She’s beautiful, she’s crazy, and someone has tortured her by injecting silver into her veins. She says her name is Silver, and that she’s lost her wild self and can’t shift any more.

The packs in North America have a live-and-let-live attitude, and try not to overlap with each other. But Silver represents a terrible threat to every Were on the continent.

Andrew and Silver will join forces to track down this menace while discovering their own power and their passion for each other.

> What drew you to writing about werewolves?

Several things! They suited my perspective as a professional archaeologist, because once I made them a species (my werewolves are only born, not turned), they offered lots of cool opportunities for showing social dynamics and pack behavior as people with human tendencies might interpret them.

Readers also already mostly know what werewolves are. That means I can spend a little time on establishing a few unique details of mine and then move on to what I think is the fun part: their culture and religion and social etiquette and all kinds of stuff. How do they interact with each other? How do they interact with humans, since they’re hiding their real culture?  If I’d made up a new creature, I’d have to spend much more time on establishing everything about that creature, and much less on their culture and interactions.

If I changed places with anyone, it would probably be one of my secondary characters. Their lives have much less upheaval! On the one hand, I think life in a pack-based society would be something I’d enjoy, since it’s so supportive. On the other hand, keeping your identity as a werewolf secret would be really stressful, so I think I’m better off as I am.


This question has two answers, so I’ll give you both. The first almost-novel-length writing exercise I did was for National Novel Writing Month. It took me about six or seven months to write 60,000 words. The reason I don’t count it as a full novel is that it was so short, and I never even tried to revise it. Silver was the first real novel I wrote. For comparison, it ended up being 85,000 words. The first draft took 3 months, but I did multiple revisions after that. Including six months where I set it aside to recharge my creativity for that project, about 18 months passed from the time when I wrote the first word to when I submitted it. 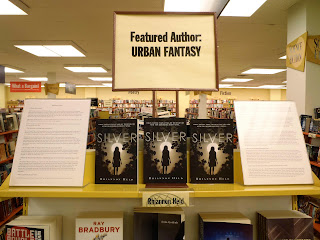 The simplest answer is “when I’m alert” and “on my laptop”. However, given that I work full time, I mostly end up writing in the evenings on weekdays and a variety of times on weekends. In my apartment, I usually take the laptop to the couch, but that’s not a necessary part of the experience. I’ll write in coffee shops with other writers, but not by myself. When it’s raining, I’ve been known to write in the back seat of my car at the park, because I want to be outside, but my laptop would not be amused if it I took it out in that kind of weather.


Meet people in the writing community. Now, when you’re first learning or honing your craft. Don’t wait until you have a finished novel and then aim yourself at editors at parties for a hard sell. Meet people now just to meet people. People who are your peers, people who are earlier in their learning process than you, people who are established writers. Go to writing community events: conventions, workshops, retreats, critique groups, gatherings at the local coffee shop. Make friends with as many people as happens naturally, and remain friendly with all the others. When it comes time to sell your novel, you probably will have networked with someone who can help you, certainly, but the real benefit is that you’ll have connections with a great group of people will support you and you can support along the way.


I’ll be so bold as to say I’ve never gotten writer’s block. I do stall every so often, unable to get a plot element to work. Then I stop writing for the day and pick up the next day. By then, I’ll either have solved the problem or I’ll work on another project for a while. How do I solve thorny plot problems? The same way I solve other mental puzzles. I think hard about it consciously for significant period while I do something that makes my mental flow smoother, like driving or walking. When I’ve brainstormed and turned the problem this way and that consciously, I set it aside and do something completely different. That’s when my unconscious gets to work. More often than not, in under 24 hours a solution will pop into my conscious mind. You might recognize this sensation from other areas of your life, whether it’s Sudoku, crossword puzzles, anagrams, or even a computer game like Myst. You can’t be lazy and stop trying immediately when a problem gets hard, figuring you unconscious will help you. You have to put in the work, and then you’ll be rewarded later.


An easy answer to this would be that I just do, but that’s not very helpful. I think my discipline comes partially from knowing my rhythms of alertness and attention and working with them rather than trying to change them. For instance, if you want to lose weight and can’t resist cookies, you can either make yourself miserable thinking about the ones in the cupboard and wallow in guilt when you give in…or you can make sure not to buy any. I know I get very distracted after about two hours of writing. So rather than beating myself up and staring at a blank screen in the third hour, I plan to do something else after two. Maybe I get fewer words written that morning because I didn’t keep going for that extra hour. But maybe that afternoon after lunch and a walk, I feel energized and write many, many more, rather than being in a pit of guilt and getting nothing more done.

I sent my first story out with a group of three or four that all ended up rejected several times. In fact, back when I was writing only short stories, I came up with a game. When I reached 100 total rejections for all of the different stories I’d sent out, I’d buy myself a flat panel TV. Around 55 or so, I sold my first story. Around 70 I sold my novel. I still haven’t quite made 100, but I’m getting close now. I know I have a lot fewer total rejections than many writers, but I sent stories out pretty slowly during busy periods in my life, like when I was writing my thesis. And now I’ve got my novel series to work on!
Email ThisBlogThis!Share to TwitterShare to FacebookShare to Pinterest
Posted by Jessica Strider at 10:15

I'm not surprised, given her background, that the author focuses on the culture and anthropology of werewolves more than the RAWRRR! :)