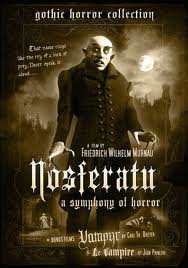 Pros: very creepy vampire, atmospheric, ending is different from the book (so it's a surprise), good soundtrack (in the restored version)

Cons: drags in the middle, supporting characters have little purpose, tinting made time of day difficult to determine

Real estate agent Hutter is sent to Transilvannia to arrange the sale of the house across from his in Wisborg, Germany, to Count Orlok.  The Count turns out to be a vampire, Nosferatu.  The sudden rise in deaths in Wisborg is blamed on the Plague, believed brought by the Count's ship.

The filmmakers were unable to get the rights to Dracula, but that didn't stop them from modelling their film very closely on the book.  Aside from the names, the movie follows the book almost exactly until Count Orlok arrives in Wisborg.  The action here (Act V) is truncated and ends very differently from the book when Ellen (the Mina character, played by Greta Schroeder) discovers how to defeat the monster.

The first Act is devoted to setting up Hutter (Gustav V. Wangenheim) and Ellen as a couple very much in love.  This is important as later in the film their connection saves Hutter's life.  It also makes the ending more profound.

The Count, played by Max Schreck, is terrifying.  His head is bald, his nose large and crooked and when he shows up as the vampire, his ears become pointy, his teeth sharp and his torso, arms and fingers elongated.  Even his silhouette is terrifying.  This film contains the iconic vampire image of the Count rising from his coffin - though his arms are outstretched here, rather than crossed on his chest as later films use.

The use of the plague to explain the deaths was, I thought, rather clever.  I was disappointed that Professor Bulwer (the Van Helsing character) didn't have much of a role.  In fact, they could have left him out completely and nothing would have changed.  The same can be said for some of the other supporting characters.

The restored version I watched had a fantastic reconstructed score (which helped set the mood and add to the creepiness) and distracting tinted frames.  I'm not sure if it was due to the tints or the photography, but title plates had to explain when it was night time, as you otherwise couldn't tell (and yellow tints made it look like afternoon).  In a film wherein the antagonist is only out at night, knowing when it's day and night is rather important.  It makes me curious how the film was originally released (as the tinted frames used were taken from different preserved versions of the film).

The movie drags a bit in the middle, but on the whole is an enjoyable retelling of Dracula.
Email ThisBlogThis!Share to TwitterShare to FacebookShare to Pinterest
Posted by Jessica Strider at 12:05