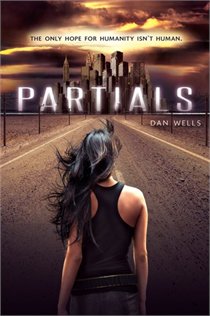 Cons: don't learn as much about the partials as you'd like, the protagonists get out of several tough situations with surprising ease

For Parents: no sex, no swearing, lots of violence, but nothing too graphic (shooting/death, off stage torture)

It's been 11 years since the genetically engineered partials rose up against their human creators, unleashing a virus that decimated the human population.  Now, the remaining survivors live on Long Island, most in the community of East Meadow, which, due to its Hope Act of forcing all women 18 and over to give birth as often as possible, has created a resistance movement called the Voice.  Into this turmoil comes a brilliant young hospital intern, Kira.  She wants to study the one thus far unstudied aspect of the plague that still kills all human children born.  Partials.

Partials is quite an adrenaline rush.  There's a lot of action and several quests, starting, but not ending, with Kira's quest to find and capture a partial.  While I wasn't always convinced that their plans would work as well as they did, enough things went wrong that I was willing to overlook how often enough went right.

Kira herself was an interesting character.  She's borderline irritating, in that she's stubborn and 'knows' the best course of action, despite only being 16 and a 'plague baby' (ie, someone born just before the end of the modern world and too young to know what happened with the partials from personal experience).  What redeems her is her reliance on her friends and her willingness to accept a change of plans when necessary.

What really sets this book apart is in its realistic depiction of society.  There's a wide spectrum of viewpoints, each valid given the circumstances.  East Meadows slowly becomes more and more of a dictatorship, as the Voice attacks escalate and the senate institutes more laws to keep the citizens 'safe', or, as Kira starts to believe, 'controlled'.  Even the principle characters argue over the right and wrong of the senate's decrees.  Particularly the debated decision of lowering the Hope Act to include those 16 and up (which would affect them directly).  The disconnect between the older generation and the 'plague babies', shown by the adults' disdain, was also well written.

My only complaint was that you don't learn as much about the partials as you'd like.  This book is set up for a sequel, so I'm hoping the partials - and ParaGen, the company that created them - will have more of a part to play.

I'll be waiting eagerly for the next book in this series.

Email ThisBlogThis!Share to TwitterShare to FacebookShare to Pinterest
Posted by Jessica Strider at 15:24

I thought that this book was one of the best books I've read in my life. There and twists and turns in this book that you'll never see coming. Its written very well and I couldn't seem to put the book down! I completely recommend this book to others. I hope Dan Wells makes a sequel!!!