Book Review: The Alchemist of Souls by Anne Lyle 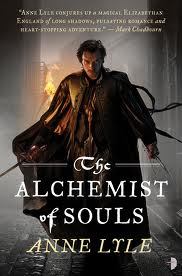 Down on his luck Maliverny Catlyn is very surprised to be offered a commission as bodyguard to the skrayling ambassador.  Like most Christians, he has heard that the skraylings are demons from the New World, and magic users.  But he needs the money to keep his insane twin brother in decent accommodations at Bethlem hospital.

Meanwhile, a troupe of actors, Suffolk's Men, are building a new theatre in which to perform a play for the ambassador, something not everyone in London is thrilled about.

With a lot of political intrigue, spies and plots, The Alchemist of Souls has something for everyone.  There's even a touch of romance (both gay and straight).  The book's opening reminded me very much of Swordspoint by Ellen Kushner, due to the setting and the mismatched friendship between Mal (nigh on penniless but son of a gentleman) and Ned (clerk and sometimes swindler).  The book quickly diverged from this pair and broadened in scope, adding more actors and political players, for which I was grateful as the relationship in Swordspoint annoyed me (I couldn't understand what St. Vier saw in his lover, as all he seemed to do was act sullenly and get St. Vier into fights to defend him).

Indeed, at times the number of offers to betray the ambassador Mal received - and the cross dressing Coby - put me in mind of Lev Rosen's All Men of Genius, though The Alchemist of Souls is by no means a comedy.  It does have a playfulness and I had to remind myself that treason had serious consequences, and that Mal's life was endangered each time he received such an offer.

The characters are fascinating, from Mal who must learn quickly how to maneuver as a spy to Coby's attempts to not let her sex be known and Ned's run in with ruffians.

The book is very accurate with regards to Elizabethan times, though it is definitely alternate history (Queen Elizabeth marries Robert Dudley and has two sons, and the skraylings are an imagined race).  Lyle uses archaic words sparingly to give a sense of place and time to help immerse you in the world she's recreated.

Magic is used very sparingly and really comes into play only at the end of the book.  Given the beliefs at the time I was impressed that some of the skrayling 'magic' was passed off as advanced learning in medicine and technology.  The limited use of real magic helped keep the world real, despite the skrayling race.

The skraylings themselves were well defined, with their own beliefs on the afterlife, way of dress, traditions, language, etc.  They really feel like a different species.

The cover makes it look like a book with either assassins (there are some, but not your traditional fantasy variety) or swashbuckling action (there's some of this, but not much).  If you're looking for a lot of fight scenes, look elsewhere.  If you like good fantasy or historical fantasy, pick this book up!
Email ThisBlogThis!Share to TwitterShare to FacebookShare to Pinterest
Posted by Jessica Strider at 11:23

you had me at "book's opening reminded me very much of Swordspoint by Ellen Kushner", and i've read so many other glowing reviews of this, now i can't not pick it up!