This review deserves some background.  I remember seeing this made for TV movie when I was in highschool, and liking it a lot.  A few years ago I decided it would be fun to watch it again but couldn't find it on DVD, used or new, so I forgot about it.  I recently placed an order with an online store and on a whim checked for Lifepod and found it.  Yay!  I watched the film knowing it would likely be cheesy and not at all worth owning.  I was pleasantly surprised by how well it held up. 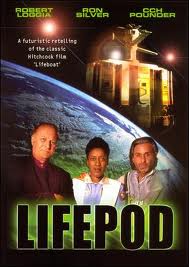 When their space cruiser blows up, a small group of survivors find themselves sharing close quarters on a badly equipped lifepod.  As the days pass, it becomes apparent that what happened to the cruiser wasn't an accident, and the saboteur is still with them.

This film is a remake of Alfred Hitchcock's Lifeboat, set in space.  A group of people, living in a tight space, all suspecting the others of horrible crimes in a life or death situation, is something that's been done in many horror movies and thrillers.  The formula works, and was used in Lifepod to good effect.  Each character had a reason for sabotaging the ship they were on and only a few of them are sympathetic.  Their paranoia and fear are palpable, as the actors give pretty good performances.

I like the idea of a Tooli (played by Ed Gale), a person with one mechanical arm designed to use all the tools necessary to keep a ship running.  And the politics of the time, dealing with Venus and its colonies, added to the setting.

The special effects are dated, but as they're sparingly used this isn't really a problem beyond the first 20 minutes.  The plot focuses on how people survive in adverse conditions and who the saboteur is.

If you can find a copy, it's a fun way to waste a few hours.
Email ThisBlogThis!Share to TwitterShare to FacebookShare to Pinterest
Posted by Jessica Strider at 10:43