Book Review: The Medieval Kitchen: A Social History With Recipes by Hannele Klemettila 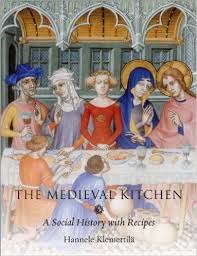 This is a well organized book on what people in the (predominantly later) Middle Ages ate.  The author presents information from a number of sources, including cookbooks, archaeological finds, artwork, health guides, and manner guides.  Chapters detail bread, vegetables, meat, fish, spices, milk/egg/cheese dishes, desserts (including fruits and berries), and drinks.  She’s careful to remind readers of foods that were unavailable at the time as well as mentioning where certain foods and spices originated (when they were obtained through trade - like the fact that peach trees originated in Persia).  The author also points out differences in menu and preference between regions - due to what’s able to be produced there, costs involved in importing goods, and other factors.

While I found the text somewhat dry, the information was interesting.  The side bars, where a lot of the social information was relayed, were particularly interesting (with segments on food in fantasy literature, candles, ergotism, vegetarianism, etc.).  I also found the segment on medieval drinks interesting (and I think it’s cool that the book has recipes for making hippocras, claret and mead).

While I haven’t tried any of the recipes - yet - some of the over 60 recipes sound very appealing while others… less so.  It’s very true that tastes have changed.  Some ingredients will be harder to acquire than others, especially depending on your geographical location.

The book is beautifully illustrated with over 100 images from manuscripts, paintings and illustrations.

If you’re interested in medieval food, this is a great reference guide, with a good variety of information and recipes to try your hand at.
Email ThisBlogThis!Share to TwitterShare to FacebookShare to Pinterest
Posted by Jessica Strider at 11:01