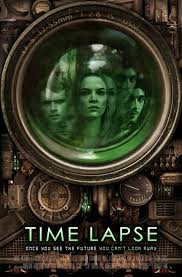 Cons: takes a while to get going, no science

Three housemates: a painter with no inspiration, an aspiring writer, and guy who’s hoping to win big on dog races, discover a machine in their neighbours house that takes photos 24 hours in the future.

The premise of the film is fairly simple, though it takes a while to get going as they have to find the machine and then figure out what it does.  But once they do, and realize they can use it to further their ambitions, things start to get tense.

The acting is great, which is important as the film really demands a lot of its protagonists.  I wasn’t that keen on Jasper’s character (played by George Finn) and wasn’t surprised that his greed and idiocy caused some of their problems.

The ending made me think about the film in new ways, going over the events to puzzle out what happened and why things happened in those ways.