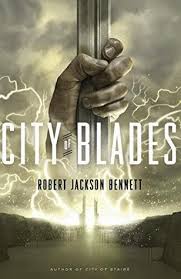 Prime Minister Shara Komayd calls General Mulaghesh out of retirement to ostensibly do a ‘vacation tour’ in order to keep her pension.  In reality, she’s being sent to check out a mysterious metal discovered in Voortyashtan that has potentially Divine qualities, and the disappearance of the last operative who was sent to investigate it.  Voortayshtan’s harbour is currently being cleared out by a company from the United Dreyling States, who need this contract to keep their struggling economy afloat.  Meanwhile, the commander of the military base there, a man Mulaghesh served under during the Summer of Black Rivers, has to navigate through local tribal politics.  Then a grisly murder takes place.

This novel is set several years after The City of Stairs, but while some characters overlap, you don’t have to have read the first book to understand and enjoy this one (though the first book was absolutely brilliant, so you really should read it).  You’re told in broad strokes what Shara’s been up to in the intervening years, but this is really Mulaghesh’s story.  Sigrud becomes a big player later in the book, but again, nothing from the first book is required to understand this story or the characters.

A LOT happens in this book.  There are numerous plots interwoven, and they’re all fascinating.  The world itself is wonderfully real.  The politics are complex - in every nation - the characters are products of their lands, cultures, families, and pasts - especially their regrets.

Mulaghesh is a wonderful protagonist, and not one seen very often.  She’s an older woman, one who’s had a hard life and who understand the difficult choices made in war.  She curses, she drinks, she smokes cigarillos and she’s forthright and honest.  She’s also quite clever, figuring out several difficult mysteries.  And she has nightmares about the time she served and the things she did during her years of service.

Signe, in command of the harbour reconstruction, is also a great character, dedicated to her job and helping her nation rise above its recent past of piracy.  She’s another hard and clever woman, but very different from Mulaghesh.  She’s also had a difficult life, but has chosen to use her time to make a better future for everyone.

It’s great seeing non-European based fantasy.  This book is engrossing and will make you think about war, soldiers, politics and more.

Out January 26th.
Email ThisBlogThis!Share to TwitterShare to FacebookShare to Pinterest
Posted by Jessica Strider at 09:33

I like books with the military edge especially with the Sci Fi genre. I have been reading the Suns of the End series by Robert Gryn, robertgrynbooks.com. He has a great handle of technology which I love, it's a great read and I am sure book 2 will be just as good!