Shout-Out: The Furnace by Timothy Johnston

I got an email from the author of this book.  It came out in December and sounds pretty cool. 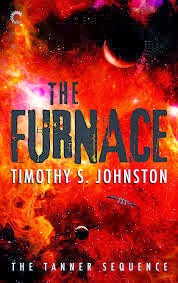 Kyle Tanner is about to die. Alone, floating in a vacsuit only a few million kilometers from a massive, uncaring sun, he has barely enough time or juice to get out a distress signal before either his oxygen runs out or he succumbs to the radiation.

When the CCF sent investigator Kyle Tanner to SOLEX One, a solar energy harvester past Mercury, he thought it would be an open-and-shut murder case. A crew member was found dead, minus his head and hands. Not the worst Tanner has ever seen, but the deeper he delves, the more nightmarish it becomes. A shadowy figure, bleeding from his hands, assaults Tanner in his quarters. Then two more turn up dead, missing their heads and hands as well.

With no one to trust and everyone a suspect - even the intriguing chief engineer, Shaheen - Tanner must navigate a crew on the brink of madness to uncover a conspiracy that could threaten the whole of the human race. Even if it means making the ultimate sacrifice.