SF Signal has a fascinating mind meld where 2013 debut authors talk about things they've learned since getting published.  One of the authors had a book come out in December which I somehow missed.  It looks pretty interesting, so here's a shout-out for it. 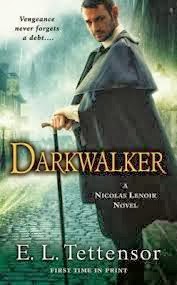 He used to be the best detective on the job. Until he became the hunted...

Once a legendary police inspector, Nicolas Lenoir is now a disillusioned and broken man who spends his days going through the motions and his evenings drinking away the nightmares of his past. Ten years ago, Lenoir barely escaped the grasp of the Darkwalker, a vengeful spirit who demands a terrible toll on those who have offended the dead. But the Darkwalker does not give up on his prey so easily, and Lenoir has always known his debt would come due one day.

When Lenoir is assigned to a disturbing new case, he treats the job with his usual apathy —until his best informant, a street savvy orphan, is kidnapped. Desperate to find his young friend before the worst befalls him, Lenoir will do anything catch the monster responsible for the crimes, even if it means walking willingly into the arms of his own doom…

I have had the pleasure to read and review "Darkwalker" and for me it was an impressive debut.
My review is available over at Edi's Book Lighthouse.

Thanks for the shout-out! Always nice to get support from a fellow Canuck.