Written by Greg Pak, Based on the songs by Jonathan Coulton
Illustrated by Takeshi Miyazawa 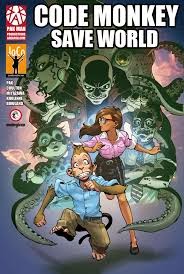 Cons: you’re missing out if you don’t know the songs it’s based on

My husband bought this as part of a kickstarter campaign.  The story is based on Jonathan Coulton songs.  The only song of his I was familiar with (beyond a vague memory of something about 'skullcrusher mountain') were the ending theme songs for the Portal video games and not ones alluded to in the story.  The upside is that you don’t need to know the songs the story is based on in order to really enjoy the quirkiness of this graphic novel, but I imagine there’s a lot of subtlety I missed because I didn’t know the references.  [The kickstarter also included digital downloads of acoustic versions of the songs used in the graphic novel, which I listened to after reading it.  And yes, there are a lot of minor references and details I didn’t pick up on the first time.]

Charles is a monkey who writes code for SCM Industries.  He’s enamoured of the secretary who works on his floor and annoyed by his in-your-face manager.  When robots attack their office and his co-workers are kidnapped, Charles is drafted by the company’s CEO, ‘Skullcrusher’ to defeat The Robo Queen.  But Skullcrusher’s not so concerned with rescuing Charles’ crush as he is with proving he’s an evil genius and convincing The Robo Queen to love him.

There’s a lot more going on than that summary indicates, most notably with the zombies.  The story jumps around a bit, but it’s always entertaining and hilarious, making me laugh out loud on several occasions.  The characters are all quirky, with the villains being the right cross between creepy and funny.

This is a great 4 issue graphic novel.

[You can preview and buy all of Jonathan Coulton's songs on his website, and you can get the comic, up to issue #3 at Monkeybrain Comics and ComiXology.]
ETA: Since there's a lot of music on his site, here are some songs to start you off: Code Monkey, Skullcrusher Mountain, Re: Your Brains, Better, Creepy Doll, The Future Soon, and Chiron Beta Prime, all of which influenced this comic in some way.) 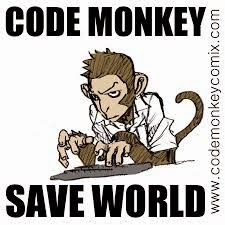 Email ThisBlogThis!Share to TwitterShare to FacebookShare to Pinterest
Posted by Jessica Strider at 10:46