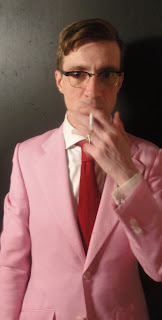 Voted by Toronto Life as one of city's 12 Most Stylish People.


> What is Technicolor Ultra Mall about?

It's about capitalism and violence. About how the two intersect. How either might be versions of the other. And how all this effects our relationships.

There's also a very human story at its heart. About a young man trying to get out of the situation life has dealt him and be a better person.

It's about people and how we dehumanize them and ourselves when we view them as products or as means to an end.

> How would you categorize your book?

It's probably easiest to call it a dystopia though I view it as a satire and a love story with a large dose of black comedy. It's about our world.

The politics of the thing are pretty front and centre but, as a writer, I see politics as incidental. I'm more interested in characters.

Having said that, one of the things I enjoy about speculative fiction is that it allows the setting to be a character. I try to take full advantage of this.

People do tend to view the world I've created as being a villain, and the book, therefore, as dystopian but that's a matter of perspective. Some people in Technicolor Ultra Mall's world are doing quite well. Others are not. Some people in our world would trade places with any of them.

>Would you change places with any of your characters?

Doing so is how I wrote it. I wouldn't do it again.

I want to write. Being a writer is a side effect.

I have different reasons for wanting to write. Usually, there's a question. Or an unbeckoned image that I need to explore. Sometimes, just a need to subvert. Often, it's a combination.

I also have this weird fear of losing my memories. It's similar to the sense one has after waking from a dream. When you reach for the notebook.

That feeling, more than anything, is probably what started me. 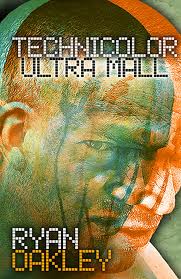 > How does it feel, having your book nominated for the Prix Aurora Award?

I never expected anyone to even publish Technicolor Ultra Mall. To find it nominated for an award is startling. I almost feel like I did something wrong or have been misunderstood in some important way.

> What were your literary influences for Technicolor Ultra Mall?


I was strongly influenced by the Situationists, particularly their concept of détournement – that is, putting existing work in a new context with the goal of undermining it-- and by John Dos Passos by way of John Brunner.

The main influence was anti-literary. It was the act of watching television.

The first novel I wrote was in highschool. It took me a few months to write it. But it was terrible. At least, I assume it was. I threw it out without looking at it.

Technicolor Ultra Mall is my first published book but my fourth or fifth novel. It took me about nine months to finish the first draft and about three months of rewrites before it was submitted.

To answer this without spoilers, I'll try to make an educated guess about the reader's response to my work.

The hardest scene to read in the book was the hardest for me to write. To this day, I don't know if I handled it well or if it could have been handled well. People have told me they felt physically ill while reading it. Others have put the book down. I felt that way writing it.

I threw up, lost weight and could not sleep.

All I can say is, I really think that if that scene was not there, the entire meaning of my book would have not only been lost but reversed. It would've been some third rate celebration of the violence I detest. The book would've been that which it purports to despise. I sometimes wonder if it is.

I write in what we call the Brown Room. It's a brown room.

Because I have a wife, a roommate, two cats and a dog, I do most of my writing between three and seven in the morning. That's about the only time I get to myself and I had to negotiate it. 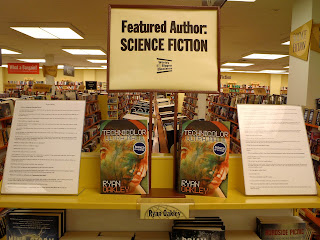 
The best thing about writing is the sense of remembering something that has never happened. The worst is when it happens.


I had no idea that it was all run by a secret cabal that initiates people with a blood ritual. Had I known that, I would've brought a change of pants.

Write the books you want to write. And pay no attention to trends or what you think people are buying. Also ignore all those folks who talk to you about branding. One day, you're going to die. And I doubt you'll be thinking 'I wish I spent more time branding myself.'


Enjoy it while it lasts.


I force myself to sit and listen. If I'm lucky, the ghosts have something to say.

Not many. I've always been really lazy about submitting. Hearing about other people's stacks of rejection letters always makes me uneasy.
Email ThisBlogThis!Share to TwitterShare to FacebookShare to Pinterest
Posted by Jessica Strider at 10:05