I saw this on my flight to Germany and was sorely disappointed to see that it's not available in Canada - yet. 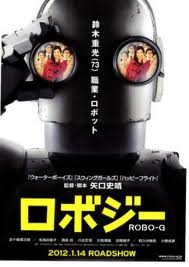 Cons: not available in Canada yet

Three employees of the Kimura Electrical Comany with no robotics experience are ordered to create a robot to display at the upcoming robotics expo.  When their prototype is destroyed a week before the expo, the men decide to hire an actor to play the robot, assuming thir boss will quickly axe the project.  The old man whom they hire does such a good job that their robot becomes famous and they must keep up the charade.

The humour in this movie could have been clicheed, but feels fresh.  Perhaps it's the addition of Japanese cultural norms, or Mickey Curtis, the old man who plays the robot, or just that there's enough seriousness to the story and limited slapstick.  The audition where a group of people are asked to act like robots was hilarious, as were the engineers introductions at the Robo Expo (where one of them mentions that his job used to be washing machine repair work).

The premise, of something going wrong and hiding that fact, isn't new.  But this movie used it well.  As things start to spiral out of control, they come up with a daring plan.

I was also impressed that the film used several plot threads.  In addition to the main story, there's a side plot involving the old man and his grandkids, a collage student studying robotics and a local reporter looking for a scoop.

If you can find a copy, it's definitely worth a watch.
Email ThisBlogThis!Share to TwitterShare to FacebookShare to Pinterest
Posted by Jessica Strider at 11:24