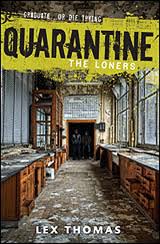 Cons: most of the book centers around the gangs, lots of violence, no deeper meaning

For Parents:  there is a lot of violence in this book, all detailed (maimings, killings, gang warfare), some drug use, some swearing, no sex (though there's mention of a rape)

David is dreading the first day of school.  It's been several months since his mother died and he quit the football team, but he just learned that his girlfriend is cheating on him with Sam, a violent football player, and pounded Sam's face in at a recent party.  His younger epileptic brother, Will, is also nervous.  It's his first day of highschool.

Neither of them could have expected the day they had.  When the East wing is bombed and soldiers close off the school no one understands why their lives have irrevocably changed.  As the students band together into gangs, David and Will are shunned due to David's actions.  He vows to keep them alive, through food drops, Will's epileptic seisures and the horrors the school has become.

Unlike the Hunger Games, there's no underlying message here.  The book is violent and makes no attempt to mitigate that or teach anything.  I was expecting the book to center on survival, instead it was more about gang warfare and a romance between the brothers and a girl they're both attracted to.

I did appreciate the complexity of the characters.  Even the kids we're told to root for have negative traits and do things wrong.  Similarly, the 'bad guys' are occasionally sympathetic.  This kept all the students feeling real, and made the book more relatable.

While the premise of kids being quarantined in a school was interesting, it wasn't interesting enough to hold me for a novel of this lengh.  And I couldn't understand why they were cut off from the world via telephones and internet.  Surely the parents of the kids would want to make sure their own sons and daughters were still alive.  Not to mention the violence in the school might have been lessened had the kids understood earlier what was happening and/or had more outside contact and more assurance that they'd eventually be able to leave the school and live.

Readers who enjoyed the Maze Runner or Michael Grant's Gone series will see similarities (lack of adults, violence, gang mentality), and will likely enjoy this book a lot.  Readers who want a deeper, more thought provoking read should look elsewhere.
Email ThisBlogThis!Share to TwitterShare to FacebookShare to Pinterest
Posted by Jessica Strider at 12:40

Thanks, Jessica.
Doesn't sound like my cup of tea, though.

It's one of the teen books that definitely appeals more to teens. And those who like violence in their books. Having said that, it's no Battle Royale. Still, I expect this won't get as much adult crossover as other teen books.