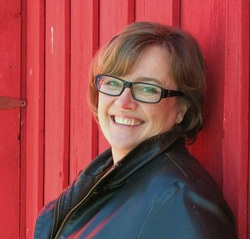 > What is The Gregori Legacy series about?

The Grigori Legacy series marries angel mythology with police procedural in a dark urban fantasy/thriller. If you're a television fan, it's rather like Supernatural meets Law & Order SVU. In book one, Sins of the Angels, Toronto homicide detective Alexandra Jarvis is tracking a serial killer who turns out to be a fallen angel. When Heaven assigns its own angelic hunter to track the same killer, Alex struggles to come to terms with a new reality that brings old memories back to haunt her — and to prevent the killer from triggering the Apocalypse. Sins of the Son picks up with Alex being thrown into the role of protector over the divine being who is supposed to save humanity  — only to find herself even more enmeshed in the events unfolding between Heaven and Hell, and in direct opposition to the same heavenly hunter she worked with in the first book. 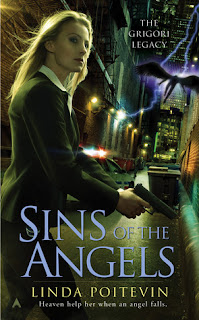 > What drew you to writing about angels?

The "what if" questions leading to the series were originally inspired by the movie City of Angels. I loved the idea of invisible beings working among us and I wanted to explore the logistics of an angelic world existing alongside our own, and to examine the idea of free will -- why would we have free will and angels not? When I began my research, the more I discovered of angel mythology, the more fascinated I became. I'd had no idea of the sheer scope of angel lore until then, and the story possibilities seem endless.

> How have your connections with the police (as a civilian dispatcher and via your police officer husband) affected your writing and influenced the character of Homicide detective Alexandra Jarvis?

I've worked with and known a great number of police officers over the years, and so writing a police character feels very natural for me. While Alex's character isn't directly built on anyone in particular, she very much reflects the dedication and professionalism I've seen in the female officers I've been privileged to know -- as well as the humanity and fallibility. As for the writing in general, my husband has acted as my personal reference system and beta reader, so I can state with relative confidence that the police procedural aspects are accurate. And I can blame any mistakes on him. :)

> What were your literary influences for The Grigori Legacy?

Because I read so widely and eclectically, I think my writing in The Grigori Legacy has been influenced by a number of genres. I greatly admire how authors such as Stephen King and Dean Koontz build suspense; I love the multiple points of view used in many thrillers; I've taken great pains to study how various writers handle backstory in a series/sequel (Jim Butcher is a particular favourite for this); and I've always been a sucker for a good love story. This might explain why some readers think of The Grigori Legacy as primarily a thriller while others comment on its mystery and/or horror aspects and still others read it for the romantic elements.

I'm going to assume that you mean the first one I actually finished, lol -- and that would be a romantic suspense entitled Renegades (which remains unpublished and probably always will!). That one took me about a year and a half...a paltry amount of time in comparison to the ten-plus years it took to write Sins of the Angels. 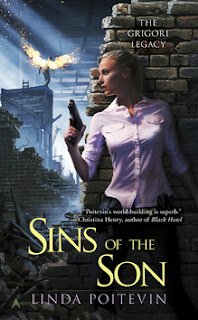 To date, the most difficult was one of the murder scenes in Sins of the Angels. I'd never written anything quite that graphic before and it took several tries to make myself "go there" so that I could give it the depth and detail it needed. Scenes involving Lucifer in Sins of the Son have been nearly as difficult, especially the ones in his point of view -- inside Lucifer's head is not a nice place to be!

I write best in my local coffee shop where there's no Internet connection, but that gets expensive, so I'm working on disciplining myself to work at home. Now that two of my daughters have moved out on their own, I have a dedicated home office (with a door!), so that helps. I try to keep to a regular schedule of mornings as I'm at my most productive while the caffeine is still fresh in my system. My routine works best if I rise at 5 a.m., feed the animals, walk the dog, have breakfast, and can be at my desk by 7:00 for about 4 hours of writing.

The best thing is being able to set my own schedule. That would be the worst thing, too, because I'm extraordinarily good at procrastinating.

I had no idea the process was so involved...or that it involved so many people. There are editors, copy editors, proofreaders, art directors, artists, marketing directors, publicists, sales people...the list seems endless, and each and every one of them plays a major role in getting a book into the hands of readers.

Read, write, learn, hone your craft, tell the stories that are in your heart, and never give up. Never, ever give up. It took me twelve years and four completed novels (and a lot of incomplete ones!) to find an agent and then an editor who believed in my story -- a lot of that time the only thing that kept me going was what my husband calls sheer stubbornness but I prefer to think of as persistence. :) 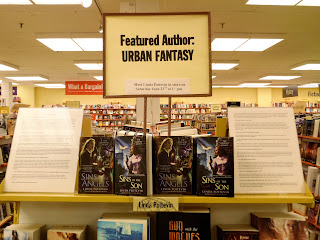 Against it? No, because I personally don't think there's any way to prevent writer's block. I do know from experience, however, that it's possible -- and when you're under deadline, necessary! -- to bulldoze through it. I have a whole arsenal of tricks that I use but my favourite is to walk away from the story for a while and focus on something else so that my subconscious has a chance to mull over the issues. I'll often have the answer I need as soon as I stop trying so hard.

Short answer? Not very well, lol! The longer answer would be that it's an ongoing battle for me. Once I become immersed in a story it's pretty easy to stay on track because I'm involved and anxious to get the words down on paper. The immersion process, however, can be a little more tricky.

There were a lot, but I honestly didn't keep track. Some authors keep their rejection letters, but I'm not one of them. If there is a usable criticism, I absorb it and then move on...writing is difficult enough without hanging onto all the reasons you shouldn't continue!

** Linda will be signing books at the World's Biggest Bookstore (20 Edward St.) tomorrow (Saturday June 23rd), starting at 1pm.
Email ThisBlogThis!Share to TwitterShare to FacebookShare to Pinterest
Posted by Jessica Strider at 09:43