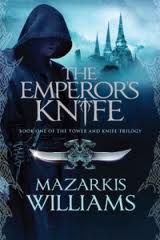 The Emperor's Knife follows many threads as a disease that tattoos its victims, and then takes over their minds, becomes more prevalent in the Cerani Empire.  Lord High Vizier Tuvaini has learned that the childless Emperor Beyon has been touched by the disease, a death sentence by his own law.  Beyon's younger brother, and heir, locked in a tower for 15 years, has gone mad, talking to himself and able to see patterns in the marks on his brother's skin.  He has discovered two things: that he is able to use magic and that there is a master behind the plague.

Tuvaini sends the Emperor's Knife, Eyul, the only assassin permitted to shed royal blood, to a wise hermit in the desert, several days' ride away, to see what must be done.  But Tuvaini is not a patient man, and has his own plans for the throne.  Meanwhile, the emperor's mother has sent for a plainswoman to marry her younger son, in hopes of maintaining the royal lineage.

This is a fast paced novel with a lot of political intrigue and action.  There's a little something for everyone: assassination, magic, romance.  The world building is superb, focused on the desert Empire, but mentioning things beyond the desert, lands with people who have different skin tones, religions and cultural practices.  We see this directly in the religion of the Yrkmen and their one god and with Mesema and the people of the Felt.

The characters are all complex, with desires, regrets and fears.  From the assassin Eyul, who was forced to kill children at the start of the book, to Tuvaini, who wants to see the empire thrive and expand.

For the start of a trilogy this book is surprisingly self-contained.  The ending is abrupt, but closes off many story threads, creating a book that could easily stand alone.

If you liked Daniel Abraham's The Dragon's Path this is the debut for you.
Email ThisBlogThis!Share to TwitterShare to FacebookShare to Pinterest
Posted by Jessica Strider at 09:05