Book Review: Empire in Black and Gold by Adrian Tchaikovsky 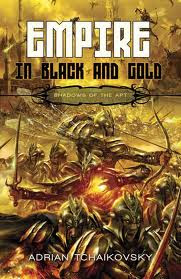 Cons: uneven pacing made the ending drag a bit

Stenwold Maker knows the Wasp Empire is going to attack the Lowlands… sometime. He's been warning the people about it for the past 17 years while other nations have fallen to their army one by one.

To find proof that their reprieve is at an end, he sends a group of loyal university students to Helleron to spy for him. But while they're decent duelists, the students are untrained in the art of espionage and the mission quickly changes focus.

The races, humans with various insect affiliations, were fascinating. Ant kinden who can speak telepathically with their fellows, wasp kinden who can fly and shoot bolts of energy, spider kinden who can stick to walls and mesmerize others. Even the history of the world, with the Lowlands once belonging to the moths and manta until those who could use and understand machinery (the apt) caused a revolution, was original. Tchaikovsky obviously spent a lot of time individualizing the races and creating the backstory. 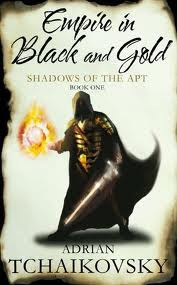 As a novel preluding a war there's a lot of fighting but an oddly limited amount of spying and intrigue. I was amazed that Stenwold would send these kids off without teaching them any useful spying skills, like designating a meeting location in the event they are separated.

And while it's an exciting read, the story seems to climax early, even though the later events are the important once with regards to the coming war.

Ultimately it's a good book with some room for improvement.
Email ThisBlogThis!Share to TwitterShare to FacebookShare to Pinterest
Posted by Jessica Strider at 10:56