Movie Review: What Happened to Monday 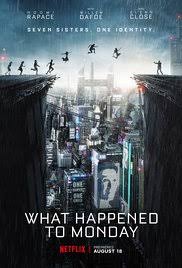 Cons: a little hard to keep the sisters straight

In a future with gross overcrowding, a law is passed stating only one child per couple is allowed. Any siblings born are frozen, to be brought back when the population is under control. When Terrence Settman’s daughter dies birthing septuplets, he takes the girls and raises them - named after the days of the week - to be Karen Settman on their day. When Monday doesn’t come home one day, the others fear they’ve been discovered by the Child Allocation Bureau.

I’ve always been impressed by actors who can play multiple interacting rolls in a film. Noomi Rapace, playing 7 characters, does a brilliant job. She gives each sister a slightly different behaviour, which, combined with costuming, helps keep them straight. Having said that, I still had some trouble with this when there was a group of them together.

The setting was chilling, and chillingly realistic as a possible future. While Nicolette Cayman (Glenn Close)’s one child policy seems heartless, it’s an unfortunate truth that over population is a problem and it’s difficult to come up with humane solutions. I suspect if this sort of policy becomes necessary globally, other social changes would have to come with it (religions would need to de-emphasize large families, social safety nets would need to be improved to help the elderly so they don’t need several adult children to support them, etc.). The film’s dependence on a single policy, without further societal pressures, is untenable.

I loved that the antagonists have realistic motivations for what they’re doing. While the majority of CAB officers are just doing their jobs, Cayman knows what she’s doing, and that it’s an unfortunate necessity. Similarly, when you finally discover why the siblings have been targeted, it does make sense, even if you consider other options may have worked better.

There’s a surprising amount of action - and a diversity of it. There’s a chase scene, explosions, even a bit of romance.

This is a great, thought-provoking film.

Email ThisBlogThis!Share to TwitterShare to FacebookShare to Pinterest
Posted by Jessica Strider at 15:41