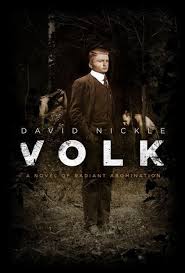 Jason Thorn (aka Thistledown) flew planes over the trenches in WWI. After some bad times, he’s landed a job flying post in Africa. But the flight there is diverted to Bavaria, Germany, where an experiment has gone wrong. An experiment with a creature Jason has faced - and survived - in the past.

This is a direct continuation of Eutopia: A Novel of Terrible Optimism, picking up 20 or so years after that one ends. All of the survivors show up and play major roles in the book. It’s interesting seeing how their lives have progressed, but also sad, as some of them don’t recover from their ordeal as well as others.

It’s very interesting learning more about the jukes and their parasitic nature. Unlike with the first book, when you knew when the characters were under the creature’s influence, in this book characters often reexamine their memories to discover they’ve forgotten things or were completely unaware of them. It make most of them unreliable narrators, but imparts their feelings of confusion and hesitancy very well.

The plot is pretty interesting, trying to figure out what happened to Jason, who and what Orlok is, and whether the Nazi’s will get their ubermensch.

Several of the newly introduced characters are gay, which was handled well considering the location and period the book takes place (Germany and France in the 1930s). One of the gay characters considered it a disease and was looking for a cure, while others were more comfortable with who they were. For the most part the principle characters around them were supportive or, at least, not derogatory regarding them.

Race, obviously comes up given Doctor Waggoner is black and married to a white woman. Again, I was impressed with how that was handled, especially entering Germany. The introduction of the jazz band and the treatment of its members was well done, showing racism in a more individualistic rather than stereotypical manner.

I didn’t find the book particularly terrifying (unlike with the eugenics of the first one) despite the presence of Nazis and some horrible things going on. There are some uncomfortable scenes and the ending was unsettling.

It is a good sequel. It answers a lot of questions raised in the previous book and shows what happens to everyone. It also shows that however much you run, sometimes you can’t escape your past.
Email ThisBlogThis!Share to TwitterShare to FacebookShare to Pinterest
Posted by Jessica Strider at 10:18