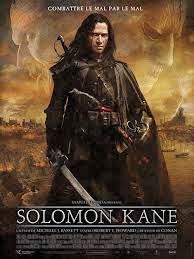 Solomon Kane narrowly escapes the devil’s minion after yet another evil plan.  Told his soul is damned, he decides to forgo his evil ways and never kill again.  His oath is tested when a religious family that takes him in is attacked.

In a fantastic example of why show don’t tell is important, this film goes out of its way to tell you - several times - that Solomon Kane is an evil man who’s done evil deeds.  But since you don’t see any of his evil deeds, it’s hard to believe what you’re told.  All the audience sees is him redeeming himself, trying to save a young girl who’s been taken captive.  Of course, the fact that he ONLY cares about the girl and not about any of the other people being enslaved does point to his evilness (ie, he’s not doing this because it’s the right thing to do - or even to save the girl, he’s doing it to save his own soul).

Several actions in the film take place a just the right time for some other action to co-incidentally happen.

Many of the plot twists are obvious, reducing tension and suspense.

Don't think about the historical period this film takes place in or your suspension of disbelief will snap. It's hard to be taken in by a monastery when all the monasteries have been closed and their lands confiscated by the state.

On the other hand, there are some great action sequences and the special effects are very well done.

Ultimately, it’s a good time waster that, while not a perfect movie, will entertain you.
Email ThisBlogThis!Share to TwitterShare to FacebookShare to Pinterest
Posted by Jessica Strider at 09:30