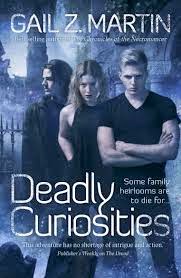 Cons: characters feel like Mary Sues, middle of the book had several scenes that follow the same pattern, unnecessary repetition

Cassidy Kincaide is psychometric, able to see images of an item’s past.  She inherited the estate auction and antiques shop Trifles and Folly when her uncle, who had a similar power, died a few years back.  Along with the store she also inherited her uncle’s silent partner, Sorren, a vampire and member of the Alliance, an organization dedicated to keeping humans safe from dangerous magical artifacts.

When some of the safe items Cassidy sold start haunting a local BnB, she and her co-worker Teag start investigating.

The characters are really interesting, with Cassidy having contacts all over the city with connections that help with her business - both the antique store and when investigating potentially dangerous items.  I really appreciated that Cassidy not only owned a store, but she and Teag actually work there.  Lots of urban fantasy books mention that characters have jobs but somehow show them with lots of free time to investigate whatever the mystery is.  These characters spend their days at work, sometimes it’s slow and they can research and do other things, and sometimes it’s busy and they can’t.  But I appreciated the veracity of their situation, that they need money to keep the store and pay rent and so have to do most of their investigative work after hours.

Having said that, they seem remarkably lucky with their investigative work, generally learning pretty quickly what they need to from all the sites and people they visit.  Now, the book explains that as due in part to Cassidy’s knowing and having a good relationship with many of the important people in town and the rest is chalked up to her and Teag’s respective magics.  Still, they have an uncanny knack of reaching the right conclusion pretty quickly, which, coupled with their martial arts knowledge and ability to get out of sticky situations starts to make them feel Mary Sue-ish.

Another thing I really liked about the book was the varied forms of magic employed.  Cassidy can see objects’ pasts, Teag can weave together pieces of information as well as spells, Sorren has the strength and agility of the undead.  The book also introduces several other characters with their own powers, a Voodon practitioner, a Viking Seior, and a Gullah root worker.  Magic takes its toll on the practitioners and isn’t an infinite pool that be used continuously when facing bad guys.

There is some repetition in how information is portrayed that irked me but probably won’t bother most readers.  Something is introduced in one chapter and then expanded on in the next chapter in a way that repeats the previous information.

A more obvious issue is that several scenes in the middle of the book follow the same pattern of checking something out, getting attacked, and getting out of the situation.  It happened too often in the same way that I started wondering why they didn’t anticipate the attacks more readily.

There is a highly satisfying end battle and all the plot threads tie up neatly before the book is over.  Despite its flaws it’s a fun start to a new series.
Email ThisBlogThis!Share to TwitterShare to FacebookShare to Pinterest
Posted by Jessica Strider at 10:36