Book Review: The Diamond in the Window by Jane Langton 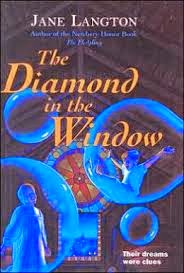 Eleanor and Edward’s large house in Concord is under threat of foreclosure unless their Aunt Lily can make up the owed money by giving piano lessons.  When they discover a mysterious attic room with a series of riddles on the window, riddles that talk of treasure, they start a treasure hunt.  But they also start having mysteries, dangerous dreams.

Published in 1962 this is a fun children’s book that involves two children in a series of dream adventures.  Not only is there a wider purpose for their adventures - to help pay off their family debts, the adventures become increasingly more dangerous for them.

The characters aren’t perfect.  Their uncle was once a brilliant man who was changed by a tragic event and is at times in the book threatened with being sent to a mental institute.  Similarly, Eleanor wears glasses to deal with her poor eyesight and astigmatism, sometimes requiring Edward to report on what he sees.

It’s a fun book, though at times the author espouses some traditional gender and Christian beliefs.  Even without the more overt references, there are some great morals being taught, like ‘it’s what’s inside that counts’, and about making the right choices in life.  There’s a fair amount of poetry quoted as well.

Ultimately it was a pleasant read, the kind of children’s book that reaches beyond it’s intended audience.
Email ThisBlogThis!Share to TwitterShare to FacebookShare to Pinterest
Posted by Jessica Strider at 12:08