Book Review: The Door in the Mountain by Caitlin Sweet 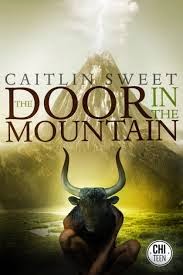 Ariadne is an unmarked daughter of King Minos and Queen Pasiphae of Crete.  As she grows up between the summer and winter palaces, surpassed in attention by her god-sired younger brother, Asterion, she becomes more and more selfish, cruel and bitter.

Chara, child of a slave and happily unmarked by the gods, befriends Asterion and helps him after the difficult and painful transformations into a bull that he must undergo to honour his father.  She witnesses first hand Ariadne’s cruelties as the princess vies for power.  And as time passes, she vows to save Asterion from his sister’s schemes.

Lovers of Greek mythology will find this a creative retelling of the minotaur and the labyrinth.  Though the gist is the same and many familiar names come up (including Daedalus and Icarus), the author takes some liberties with the plot, increasing the suspense of the story.  There were several twists I did not see coming.

I particularly loved the concept of the godmarks, magic bestowed by various gods on their subjects that allow them to do unique things.  One character can communicate with animals, one can sprout wings, one can cry wine, and another commands all things dealing with water (rain, waves).  I liked how the god who bestows the gift isn’t necessarily known, but can sometimes be guessed based on the nature of the gift.

The author spends a lot of time explaining Ariadne’s character.  She begins the book as a child, desperately wishing for a godmark like the others in her family and feeling afraid and upset that she’s disappointing her parents.  She hates and resents her younger brother and creates a veneer of calm strength to protect herself.  This care makes it hard to hate her as she grows older and becomes more bitter and cruel.  While I hated what she did, I found myself somewhat pitying her, which is ironic as she’d hate the idea that she could be pitied.  Then she makes some horrible decisions and the pity left.  I still kind of liked her, but I could no longer sympathize with her pain.

Chara on the other hand is the kind of friend you’d love to have.  She’s generous, considerate, and clever.  Like Ariadne she’s forced to hide her feelings but for different reasons, and she never forgets her friends.

The dynamics between the king and queen were also very interesting to read.

The story is fairly slow moving.  While this does allow the author time to focus a lot on the characters, the ending dragged a little bit.

I didn’t realize this was the first book in a duology, so I was surprised when I came across the epilogue.  While there’s an important event at the end of this book, it’s very much the first half of the story, and you’ll be reaching for the next volume when it comes out.
Email ThisBlogThis!Share to TwitterShare to FacebookShare to Pinterest
Posted by Jessica Strider at 11:19