I know this is an odd topic for an SFF blog, but there is a correlation.

About 10 years ago I taught English in Japan.  While I was there I learned several recipes from people I knew.  Unfortunately, though I kept a daily journal and mentioned that I'd learned these recipes I never wrote them down.  Why should I?  I was using them often enough and remembered the ingredients and directions.

A few years ago I decided to try making one of these recipes again, sweet potato cookies.  It's then that I realized I hadn't written the recipe down and I couldn't find it anywhere on the internet.

Yesterday at work I mentioned this recipe to one of my co-workers.  After the brief chat I went back to shelving manga.  I had some copies of Kitchen Princess (by Natsumi Ando) to put away, a manga another co-worker that day said was pretty good.  So I decided to flip through the first one and see if it interested me.  One thing interested me a LOT, which is that the manga includes recipes at the back.  I wondered what the odds were that this sweet potato cookie recipe would be in one of the mangas, and started looking.  Not in the first or second.  We were out of the third.  Not in the fourth or fifth.  But I wasn't giving up.

And there it was at the back of the 6th issue.

In the interests of not losing the recipe again, here is it for anyone who wants to try it. 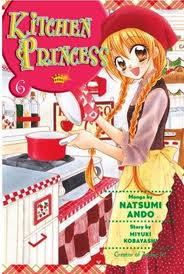 1. The author recommends cutting the sweet potato into large slices and cooking it in the microwave.  I tried that but you get rough skin which makes mashing it tough and gives you chunks in the mash.  In Japan I remember boiling the sweet potato (peeled), so it's soft all the way through.

Peel the sweet potato and mash it in a bowl.

2. Add the butter and sugar.  Let it cool to room temperature (so you can handle the mixture).

4. Form the dough into cookies (the author suggests 4 larger ovals, but I did several smaller ones, as that's what I was taught).  The dough is pretty mushy but should hold a Lady Fingers style shape (small ovals that bulge a bit in the center).  Whisk the egg and brush egg over the tops of the cookies.  (This is an optional step but will give you a more browned top.)

5. Bake for 5 minutes at 480 degrees Fahrenheit (250 degrees Celsius).  This seems REALLY high, so I baked mine for 20 minutes at 400F.  The point here is to brown the egg topping a bit and caramelize the sweet potatoes.  They should be soft inside with a slight firmness to the outside (remember, they're basically already cooked from the microwave/boiling from step 1).

Here's how mine turned out and they are delicious. 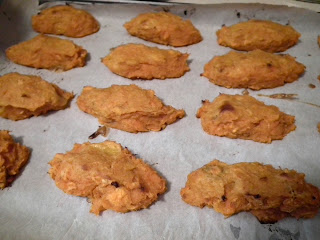 Email ThisBlogThis!Share to TwitterShare to FacebookShare to Pinterest
Posted by Jessica Strider at 12:11