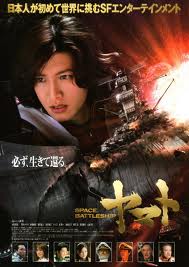 The year is 2199 and Earth's space fleet has been destroyed.  Only one ship that fled from the battle under Captain Okita (Tsutomu Yamazaki) survived the most recent attack by the alien Gamila.  Earth is a radioactive ruin, with survivors living underground.  On a scavenging mission, former pilot Susumu Kodai (Takuya Kimura) finds an alien device with schematics to an alien world outside the solar system.  It seems they have a cure for radiation and Captain Okita intends to get it from them using the newly repaired Space Battleship Yamato.

Kodai reinlists and quickly clashes with the captain, whom he believes left too many men to die including his older brother, when he ran away from the last battle.  As the mission progresses and the Gamilas attack more than once, Kodai is thrust into a position of leadership and learns that being a captain means making difficult decisions and personal sacrifices.

I was very impressed by Kodai's character arc.  He starts off as a brash and angry though competent young man, and ends as a mature and charismatic leader.  My only complaint about his character was that he was a little too perfect.  He was good at everything, a skilled pilot, good commander, concerned for the men and women under him, etc. etc.

His foil, in the form of Yuki Mori (Meisa Kuroki), ace pilot of the unit Kodai used to command, believes him a coward and not worth following.  Her realization of his tragic past and his humanity changes her from a brash and angry though competent young woman into a team player.

See a theme here?  But the coming of age stories of these two young people is offset by the very real dangers of the aliens.  The writers were not afraid of real world war situations.  Major characters get killed during battle, which increases the tension of the film and the viewer's concern for everyone.

The special effects were very well done, with a lot of explosions, a few warp jumps and some alien encounters (outside of the ships).

Based on an anime of the same name which ran for 28 episodes, the story in this live action film was rushed, having to set the scene, introduce the characters and mission, and then go on the entire mission and return.  The film does a great job of getting you to love the characters, but a lot of the journey is condensed and felt very rushed.

On several occasions, most notably towards the end, the action paused so that two characters could have a sentimental moment.  While this was great for character building, it killed momentum for the action sequences and created a disconnect, as the viewers know the aliens would not wait so long before attacking again.

Despite it's flaws it's a fun movie with some good effects and great characters.