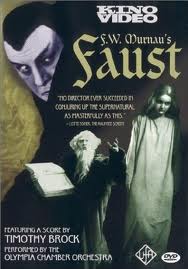 Pros: good use of light and shadow, atmospheric, decent acting

Cons: second half is much less interesting than the first half, ending felt like a cop out

The devil makes a bet with God that he can corrupt the God fearing Faust.  If he wins, he gets the Earth.

This film is VERY atmospheric.  The director made amazing use of light and shadow to add an air of menace.  There's also a lot of fog, smoke and dust, creating a dark feel to the film.

This is the first silent film I've seen where I haven't known the story (beyond the basics) going in.  As such, I found the majority of the plot fascinating.  I'd always pictured Faust as a younger man, who wants to have everything and so willingly makes a deal with the devil (much like the husband in Rosemary's Baby).  So seeing an old Faust, frustrated with God for not ending the plague that's decimating his city, was a bit of a shock.  Especially when he calls on Mephisto at the crossroads, holding up a book of magic, looking exactly like Moses holding the Ten Commandments.

Mephisto also didn't fit my expectations, though part way through the film he changes looks - and does a great Dracula impression (tight cloak, widow's peak, sharply slanted eyebrows).  The idea that people can be led to hell by small decisions - by good intentions - is played up (invented?) here as Faust signs the contract with the concerns of others in mind.  His good intentions quickly fail.

A few of the effects, like the flying cloak, didn't hold up, but there's little 'magic' beyond vanishing people (which does hold up) so that's not a problem.  I did find that the movie dragged during the seduction of Gretchen.  It picked up again afterwards, being very tense while I wondered what her - and Fuast's - fate would be.

The principle actors all do a great job, and Gretchen (Camilla Horn) is very beautiful, with her pale complexion and painted lips.  Mephisto (Emil Jannings) - in both his guises - is suitably creepy and evil, even while pretending to serve Faust faithfully.  Faust (Gosta Ekman) - both old and young - does a great job of showing sorrow and heartache.

I found the ending a bit anti-climactic.  I'd expected Fasut to think his way out of his contract which isn't what happens (I won't say more than that).

Despite it's faults, it's a really good film.
Email ThisBlogThis!Share to TwitterShare to FacebookShare to Pinterest
Posted by Jessica Strider at 10:29