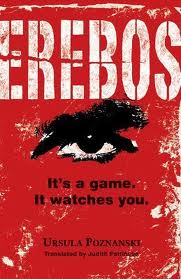 Cons: told friendships exist where there's no evidence of them in the book, some readers may dislike the switch between the author's use of past tense in the real world and present tense in the game world

There are three rules for playing Erebos.  1. You only get one chance.  2. You must play alone.  3. The content of the game is secret.  When Nick Dunmore finally gets his hands on one of the mysterious square packages circulating around his high school he's determined to play - and win - the game.  But Erebos is unlike any game he's played before.  It knows when he lies about his name.  It asks him to do tasks outside the game.  Bizarre tasks like photographing a man in a parking garage.  When the tasks become dangerous, he wonders if the game, as amazing as it is, is worth the real world risks he's taking.

Judith Pattinson deserves a lot of credit for her translation of this book.  It's readable, intense and clever.  The author has peppered the book with references to Greek mythology and created a plot that ties together neatly at the end.


The characters are all three dimensional.  Nick is a jock at his school, friendly with most people but rude to the 'freaks' in his class.  He starts the novel wanting to know why people around him are changing, becoming secretive, creating friendships with those they never liked before.  When he finally starts playing, he himself changes dramatically, dissing his best friend, skipping basketball practice and playing at all hours.

There was a bit of disconnect here where the reader is told that Nick is friends with Colin and others, but it's never shown in the book.  Colin is already a player and distanced from Nick when the book begins.  But all of the students react in different ways to the presence of the game - some want in, others don't care, and when someone gets kicked out they often cause a scene, trying to find someone willing to break the rules and give them a second chance.  Even the teachers react differently to the mass absences, though only two of them are mentioned with any regularity, the English teacher who's convinced the game is dangerous and the basketball coach.

Some readers may dislike the shift between past tense usage to depict actions in the real world vs present tense usage to describe the game world.  This reviewer only noticed the change a few times and it never pushed her out of the book as has happened with other novels that tried similar tricks.  The present tense creates a sense of immediacy with the game play.  It's easy to see why the kids get hooked so quickly and why it's hard for them to tear themselves away from it.  It's also easy to see why they're so willing to perform the tasks asked of them by the game - who wouldn't want to play a game that caters to your interests and rewards you in the real world?

The game is set in a medieval world, with orcs, trolls and other familiar and unfamiliar monsters.  Players create their characters and then fight monsters as training to help Erebos defeat Ortolan.  Levelling up is done in two ways - winning levels from other players in Tournaments and performing a task in the real world.  The game world is detailed and highly interactive, with players trying to find wish crystals and join the inner circle (that gets specialized training in order to complete their mission).

This section of the book became so intense this reviewer nearly got reader fatigue, but it stopped and moved to a new focus at just the right time.  The novel is well paced that way, switching focus a few times to keep the action moving towards the game, and novel's, climax.

Nick does find romance towards the end of the book.  It's fairly low key and develops naturally as the characters react to what's happening.

The ending adds depth to all the events that have been mentioned throughout the book.  The characters face real consequences for their decisions along the way and the origins of the game are explained.  If you like video games and aren't afraid of reading 'YA', definitely pick this book up.
Email ThisBlogThis!Share to TwitterShare to FacebookShare to Pinterest
Posted by Jessica Strider at 07:00