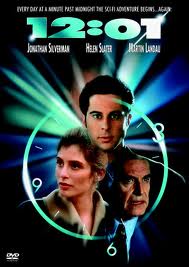 Pros: fun story, quirky romance, touches of humour, days repeat enough to get the point but not enough to be annoying

Barry Thomas (Jonathan Silverman) is having a REALLY bad day.   He's late for work - again, he accidentally forgot to add Dr. Thadius Moxley's assistants to the payroll, he gets fired and the woman he likes (and finally got up the nerve to talk to) gets shot right in front of him.

When he wakes up the next day things are suspiciously similar, from the news story of Dr. Moxley's experiment to the phone call from his mom.  And no one seems to know about Lisa Fredericks (Helen Slater)'s death.

Barry must figure out why time is looping, why he can tell it's happening when no one else is aware of it, and how to stop it.  All while also trying to save the woman he's come to love from dying, and making her realize they're perfect for each other.  Every day.

Like Groundhog Day, this movie relies on repetition of events for its story telling.  Unlike Groundhog Day, the days only repeat a limited number of times, and the emphasis is on figuring out what's happening and trying to stop it.  Each day is unique despite the repeated events, and the romance between Barry and Lisa is completely different each day.

There's a fair amount of humour involved with Barry trying to explain to Lisa who he is and why she should believe that the experiment she's an assistant on has gone bad.  Barry's cubicle neighbour is also a riot, playing pranks on him that go the wrong way in increasing degrees as Barry encounters the same tricks each day.

The science behind the experiment is never mentioned in detail, so if you're looking for hard SF look elsewhere.

As a made for TV movie, it's surprisingly clever, with some good acting and fun dialogue.
Email ThisBlogThis!Share to TwitterShare to FacebookShare to Pinterest
Posted by Jessica Strider at 09:00

I really enjoyed it when I watched it last year. I had no idea that it was a made for tv movie, that raises it even higher in my opinion.