Book Review: The Way We Fall by Megan Crewe 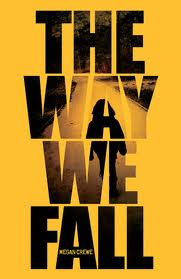 Somehow I got the impression that this had SF elements in it when I requested the book from Netgalley.  It doesn't.  But it was a fortuitous mistake as the book was extremely well written and avoided the 'adults are stupid' pitfalls some YA books fall into.  If you haven't tried YA and don't mind a female POV, give this book a chance.

Kayla and her family have moved back to the small island in the Canadian Maritimes where she grew up, after spending 5 years in Toronto.  Her decision to become less stand offish comes at the wrong time as an unknown virus begins to spread around town.  Her microbiologist father and the other doctors are at a loss as to how to stop the growing epidemic.

Written as journal entries by 16 year old Kayla to her former best friend Leo, off the island studying, the book chronicles the viral epidemic from the confusion surrounding the first few cases to an intimate knowledge of loss and despair.  As time passes and the virus is no closer to being cured, a gang causes increasing problems and the death toll mounts.

Short entries make for a quick read.  The protagonist is a sympathetic young woman who always feels out of place among others, constantly aware of how they treat her.  As the book progresses she learns more about herself and others, as the town deals with the problems that arise.

The climax is especially thought provoking and intensely powerful.  Which makes the ending that much more abrupt.  There's little denouement and no wrap up at all.

Still, it's a great journey and a very well written YA book otherwise.

Out January 24th.
Email ThisBlogThis!Share to TwitterShare to FacebookShare to Pinterest
Posted by Jessica Strider at 09:22