Book Review: Ashes of a Black Frost by Chris Evans

Please note, as the third book in the Iron Elves trilogy this review contains potential spoilers for the previous books. 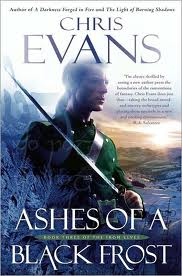 A second star has returned but not without cost.  As a poisoned metallic snow begins to fall in the desert, heralding more of the Shadow Monarch's nightmares, the Iron Elves must decide their route.  With Yimt's company missing, including Visyna and Konowa's parents, the Iron Elves head for the coast by way of Suhundam's Hill, last outpost of the original Iron Elves.  There they face new dangers that make wiping out the Shadow Monarch more important than ever.

This book introduces new monsters again, including evolved sarka har, a once more transformed Emissary and the Shadow Monarch herself.  It also explains the fate of the original Iron Elves Konowa is so eager to find.

There is a lot of character development, both with established characters and newly introduced soldiers.  Often fantasy books dealing with the military or feudal hierarchies will constrain themselves to a small group of people, eventually causing a gap in characters as previous ones die or retire.  So it was nice to see Evans bring forth a new batch of soldiers in this book and continue promoting them within the military ranks.  It gave the series a realistic feel that the world continues, even as characters move on.

The action is fast and furious, with occasional downtime when the characters laugh and learn, though there was a section in the middle where it seemed everyone should have been collapsing from exhaustion.  Konowa himself managed to recover remarkably fast from several serious accidents throughout the book.  Readers may find themselves requiring a short break from the relentless action.

The romance between Konowa and Visyna seemed a little forced.  Though it was hinted at through all three books there was little time for the characters to really get to know each other after the first book.  It was nice seeing Visyna come to understand Konowa better in this installment, but there was no scene where she conveyed her new understanding to him.

The series came to a highly satisfying conclusion.  If you like elves but want something different, give this series a try.
Email ThisBlogThis!Share to TwitterShare to FacebookShare to Pinterest
Posted by Jessica Strider at 12:43