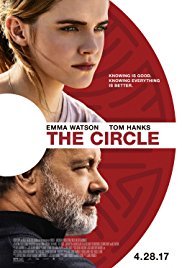 Cons: brings up issues but doesn’t examine them, ambiguous ending

Mae’s happy landing a job at The Circle, a social networking company bringing people together. But the corporate culture is very demanding. When she makes a bad decision she starts an experiment that changes the world.

Based on a book by Dave Eggers, this film delves into the question of how willing people should be to give up their privacy in return for safety and connectivity. It asked some great questions, but didn’t do such a great job of answering or even examining those questions.

Mae, played excellently by Emma Watson, agrees to wear a camera at all times, streaming her every action to the world. Let that sink in for a moment. Bathroom privacy aside (she can turn the camera off for 3 minutes) everything she does is open for public consumption. As an introvert I immediately balked at the lack of privacy inherent in this decision. The company implies that wanting to be alone is somehow wrong and anti-social. I liked that the film showed Mae’s lack of intimacy once she put the camera on: no one was willing to talk about their problems with her and she couldn’t really share her own. The film points out that when people know they’re being watched they tend to act better, but failed to address the fact that people generally stop being genuine. They ‘act’ for the camera. And while that’s fine in smaller doses - if you’re an extrovert - few people would want their more ‘negative’ emotions broadcast (depression, grief) not to mention those things everyone does to make life easier (gossip, gripe, complain about loved ones, friends, co-workers, bosses). Complaining about people is one of the social glues that allow people to function in society, but while it can be good for the complainer’s mental health, you wouldn’t want the subject of those conversations to know about them. Humans need outlets for frustration and anger, and the entire ending undercuts that. More cameras won’t solve those problems, they’ll just exacerbate them.

I feel as if the film didn’t do a very good job of showing what the company’s owners had done that was bad, that didn’t include the company as a whole. Yes, the policies were bad (from a privacy stand point), but getting rid of the owners wouldn’t change that policy, especially since Mae wanted even more cameras and privacy breaking to continue. The ending is propelled by a death caused by one of the programs she supported and yet it expands on the programs that caused the death in the first place. There was a great opportunity to talk about the power of mobs to do good and evil that the film completely ignored. I was shocked that the death didn’t make Mae realize just how bad mobs can be. Even with the previous search I expected a more negative outcome.

There were also some comments in the middle of the film that I questioned. At one point the idea came up for it to be mandatory for people to get accounts with this privately owned for-profit corporation and that membership would be how people were registered to vote and do other government affiliated things. I can’t imagine any government giving a private company such power. Not to mention the damage it could do if it got hacked or if the company decided to subvert democracy and change votes from the inside. None of which was brought up by the film.

The characters were all interesting. I loved the inclusion of Mae’s father having a chronic illness and how the need for health insurance affected her early decisions. The supporting cast was all brilliant: Karen Gillan as her friend, Bill Paxton as her father, Tom Hanks as one of the owners, and John Boyega as a concerned employee.

I liked the questions the movie asked but didn’t think it examined them with the necessary depth and found the ending unsatisfying. I find myself wanting to discuss it, so it would be great to watch with a group of friends.

Email ThisBlogThis!Share to TwitterShare to FacebookShare to Pinterest
Posted by Jessica Strider at 10:14