Many thanks to Simon and Schuster for sending me these Star Trek novels. 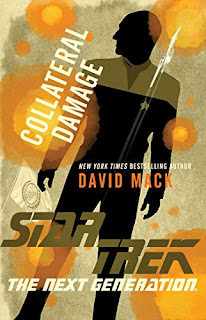 Star Trek The Next Generation: Collateral Damage by David Mack - I watched the first several seasons of TNG when they originally aired, but didn't see the last season or two. I'm a little concerned I won't know what's going on here, but I do like the characters and conspiracies can be fun to read about.

The past returns to haunt Captain Jean-Luc Picard—a crime he thought long buried has been exposed, and he must return to Earth to answer for his role in a conspiracy that some call treason. Meanwhile, the U.S.S. Enterprise is sent to apprehend pirates who have stolen vital technology from a fragile Federation colony. But acting captain Commander Worf discovers that the pirates’ motives are not what they seem, and that sometimes standing for justice means defying the law….

Star Trek: The Motion Picture, 40th Anniversary Edition by Gene Roddenberry - This book is the novelization of one of only two films I've ever fallen asleep in. I was pretty young at the time and woke up for the ending but have always been curious of what actually happened. 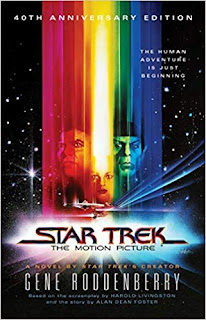 The original five-year mission of the Starship Enterprise to explore strange new worlds and to seek out new life and new civilizations has ended. Now James T. Kirk, Spock, Dr. McCoy, and the rest of the crew of the Enterprise have separated to follow their own career paths and different lives. But now, an overwhelming alien threat—one that is ignoring all attempts at communication and annihilating all opposition in its path—is on a collision course with Earth, the very heart of the United Federation of Planets. And the only vessel that Starfleet can send in time to intercept this menace is a refitted Enterprise, with her old crew heeding the call to once again boldly go where no one has gone before….

Email ThisBlogThis!Share to TwitterShare to FacebookShare to Pinterest
Posted by Jessica Strider at 13:26