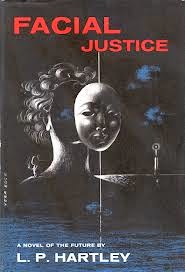 'The spirit that dwelleth in us lusteth to envy...'

Jael 97's good looks have been deemed a cause of discontent among other women, and she finds herself reporting to the Ministry of Facial Justice, where her face will be reconstructed to become 'beta' (second-grade). For she lives in a post-apocalyptic world, where society is based on a collective sense of guilt, where all citizens are labelled 'delinquents' and obliged to wear sackcloth and ashes. Individuality and privilege, which might arouse envy, are stamped out.

But Jael refuses to fit in. Forced to become 'beta', and thus exempt from envy, her self-respect and rebellious spirit cannot be suppressed so easily. Slowly, she begins the struggle to reassert the rights of the individual.


This is a reprint of a book that came out in 1960.  I've not heard of it before, so I'm glad it's being brought to attention again because it sounds really interesting.
Email ThisBlogThis!Share to TwitterShare to FacebookShare to Pinterest
Posted by Jessica Strider at 10:14