Shout-Out: Rudolph!: He is the Reason for the Season by Mark Teppo

We've got our first snowfall sticking to the ground here, and I'm thinking about Christmas.  Which means it's the perfect time to do a shout-out for Mark Teppo's newly released novel. 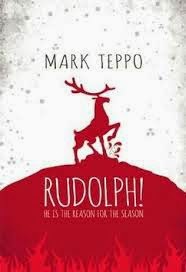 Rudolph! is a first-person account of the behind-the-scenes workings at the North Pole. Narrated by Bernard Rosewood, one of the elves of the North Pole Consortium, the story begins with Santa's realization that a young girl's request to get her dad back for Christmas isn't going to happen. Dad, you see, died in a car accident on a snowy road shortly after Thanksgiving. The NPC can do a lot, but they can't do miracles. Enter Rudolph, who has been hairless, cranky, and perpetually irradiated since the unfortunate malfunction of the Nuclear Clock in 1964. Rudolph is a survivor of the worst accident in the 400-plus years of NPC delivery, and if there is anyone on staff who believes in miracles more than jolly Saint Nick, it's Rudolph. Bernie, in a valiant effort to keep Christmas from going off the rails, is swept up into a Heaven-storming, Hell-crusading, Night of Bad Musical Numbers adventure to ensure that every child wakes up with presents on Christmas morning.

Rudolph! is a funny and fast-paced reaction to fifty years of world-weary cynicism, technological advances, and post-millennial ennui since Rankin/Bass brought a stop motion reindeer into our living rooms.