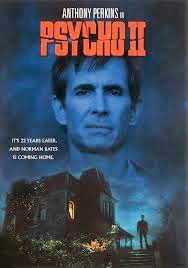 Norman Bates is released, cured, from psychiatric care.  He meets a young woman at his new job at a diner who’s having boy trouble and invites her to stay with him.  Meanwhile, he starts getting phone calls and notes from his dead mother, making him question whether he really is sane now.

This is a film about how to drive someone mad, and it’s terrifying to watch.  Because you’re seeing the film from Norman’s perspective, you know the notes and calls are real, but it’s easy to see why Norman questions his sanity when things start going wrong.

It’s the sort of film that makes you wonder what could have happened had the people tormenting Norman left him alone.  Would he have stayed sane and been a good citizen or would he have slowly fallen into madness anyway?

Anthony Perkins, reprising his role as Norman Bates, does a brilliant job, though some of the other actors tried too hard, especially towards the end.

Like the original, it’s not a terribly scary film, the interest is in the humanity of the characters, and their madnesses.

Email ThisBlogThis!Share to TwitterShare to FacebookShare to Pinterest
Posted by Jessica Strider at 11:46