Book Review: Of Bone and Thunder by Chris Evans 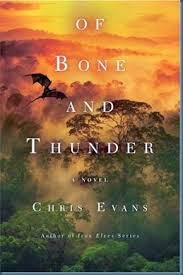 Join the Kingdom’s ‘finest’ as they fight to keep their colony, Luitox, free from the Forest Collective.  But the FnC are hard to fight, hiding deep in the jungle and, though their arrows snipe the troops, they’re never there when the troops arrive.  Manned dragons fly overhead, ferrying troops and flaming suspected hotspots.  Some newly freed dwarves have enlisted but still bear hatred for their former slavers.  New technologies are invented as soldiers face a mostly faceless enemy.  The army must deal with privations and problems galore, even as the war finally rushes towards a conclusion.

This is a fantasy retelling of the Vietnam war.  I don’t know much about the war, but this makes me want to learn more.  If even a portion of what happens in this book is true it was a truly horrific event.  The book touches on all sorts of issues - racism, demonizing the enemy, lack of communication, the incorporation of new and barely understood technology, the horrors of battle, losing friends, those back home not understanding the realities of what’s happening, and more.

It’s a difficult read in that no punches are pulled.  War isn’t noble or heroic, it’s dirty, full of pain and desperation.  You’ll be seeing blood, puke and all other bodily fluids.  Don’t get too attached to any of the characters as the ones that make it to the end do so greatly changed by their experiences.

There’s a fair amount of slang to master, but aside from ‘rag’, short for dragon, which took me a while to figure out as there was no context for it the first time it was used, I picked it up pretty fast.  The book jumps ahead frequently, allowing it to cover more time and give a broader look at the perceptions and realities of the war.  You’re also getting several points of view: a grunt soldier, two thaums (a cross between a magic worker and a scientist), a dragon rider, people in different levels of command, a journalist, etc.  This also helps give a more varied view of the war.

The opening is a bit slow.  There’s an atmospheric prologue and some scenes with soldiers followed by a chapter that consists of a much needed info dump that explains the purpose of the war.  Things pick up fast though and draw you into the lives of the characters.

It’s a compelling read, and sometimes its easier to come to grips with the horrors of reality when they’re presented as somewhat removed from it.  History retelling aside, it’s a great book that will have you wishing that real wars were a thing of the past.
Email ThisBlogThis!Share to TwitterShare to FacebookShare to Pinterest
Posted by Jessica Strider at 11:27