Book Review: Dead Inside: Do Not Enter, Notes From the Zombie Apocalypse by Various 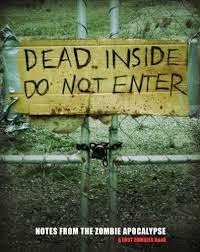 This is a found note story.  There’s an editor’s note at the beginning, explaining that these notes were found in a backpack and a quick chronology of the super-flu outbreak that led to the zombification of the world.

The notes run the gamut of letters to loved ones, confessions, warnings, pleas and threats.  There are a few photographs thrown in for effect.  The notes create a strange juxtaposition as some of them are written on items of normal life (flyers, greeting cards, etc.).

Most of the notes have no context and are incomplete, but some tell horrifying stories and are really jarring.  For example: “they weren’t bitten, I just told you that so it would be easier for you to leave them.”  Or:

My only complaint with the book was that most of the notes were handwritten in script that was hard to read.  It made it authentic, but there were times I had to puzzle out the words.