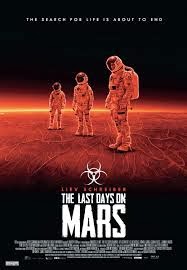 A crew on their last 19 hours on Mars before the 6 month voyage home unexpectedly discovers what they were looking for - alien life - with disastrous consequences.

This is basically a zombie movie set on Mars.  In some ways it was like Alien, mainly because Kim Aldrich’s character (played by Olivia Williams), is so cold (by which I mean ‘survival mindedly intelligent’ and focused) she reminded me of Ripley.  There’s a decent amount of character development, including some down time between attacks, which makes various deaths more meaningful to the viewer.

There was a good variety of characters’ reactions to the crisis, with a guy having the most severe breakdown (and no hysterical women!).  The actors, on the whole, did a fantastic job.

While the situation was quite terrifying, and the tension ramped up in several scenes, there were no huge, jump out of your seat, scares.  After the zombies were revealed it was pretty obvious as a viewer where things were heading.

My husband noticed several scientific inaccuracies, most noticeably that characters ran like they were on Earth, rather than on a 1/3 gravity planet.  He also questioned the ability of an alien entity to interact with human physiology so rapidly and the speed with which it became immune to one of their attacks.  Similarly, the amount of time for the airlocks to open and close seemed to get shorter as the movie progressed, amping up the tension at the expense of integrity.

It was entertaining, and looked great.
Email ThisBlogThis!Share to TwitterShare to FacebookShare to Pinterest
Posted by Jessica Strider at 11:27