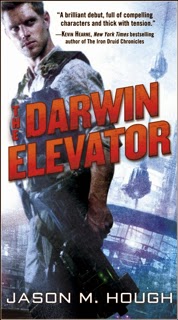 Novels:
The Darwin Elevator
The Exodus Towers
The Plague Forge

> What is The Dire Earth Cycle about?


It's the late 23rd century. A plague has swept across the globe and the only people who are safe are in Darwin, Australia where a space elevator of mysterious alien origin protects against the disease. A small group of people with a rare immunity scavenge the dangerous wastelands beyond Darwin for useful items, a role that eventually draws them into the efforts to unravel what these aliens want.

> What drew you to writing about an alien caused apocalypse?


I'd wanted to write a story with a space elevator at the center of it, but I kept reading how building such a device would be impossible. The contrarian in me thought, "who says we're the ones to build it?" and the story took off from there. 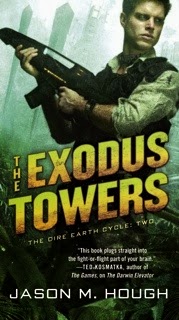 > How do your aliens differ from what we've seen before?


Well, for one they're largely unseen.  They're sending ships to earth in what appears to be a carefully crafted sequence, but to what ends nobody knows.


After leaving my job as a game designer, I needed a new hobby to fill the creative void in my life.  I decided to try writing and quickly came to love the craft.


Nah, I'm having too much fun.  Besides I'd miss my wife and kids!

> You were a game designer for several years.  Did you have any game or literary influences for The Darwin Elevator?


Most of the games I designed were real-time strategy, and there are a few aspects of those games that wormed their way into the books.  As for literary influences, I'm truly a product of everything I've read.  Specifically, these books were strongly influenced by post-apocalyptic novels like Stephen King's The Stand, and first contact stories like Rendezvous With Rama by Arthur C. Clarke. 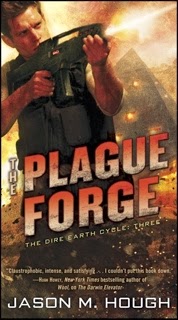 > You wrote The Darwin Elevator in 2008 as a Nanorimo project.  You didn't get a publishing deal until 2011.  How did you stay motivated to keep refining the manuscript until it was publication worthy?


I told people, friends and family, that I was working on it.  That way I had to work on it, lest I admit failure when they asked me how it was going.

The end of the third book. It was really hard for me to draw everything together in a satisfying way, but still leave open the door for more stories later.


I write in the mornings, usually in my den or at a coffee shop.


It's largely solitary. This is good because your success or failure is entirely up to you, but bad because you can wind up in a creative vacuum.


That they would offer to buy a series of books simply based on their impression of the first book.  The publisher offered a contract for a trilogy without even asking me how many books I envisioned, or indeed where the overall story was going. Which was actually a good thing, since I had very little written down in terms of plans.  In the end my editor and I were able to collaborate very closely on the outlines for books 2 and 3. 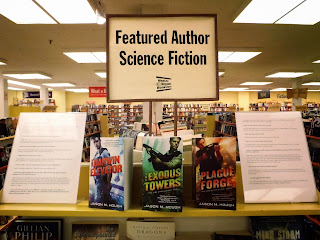 
Listen to audiobooks. You'll get a new appreciation for language, learn what kinds of prose hamper or improve pace, and eventually you'll start to hear your favorite narrators in your head as you write.

Close your eyes and watch the movie. Seriously, try to picture the scene as if it were a film, and keep rewinding until you can envision it clearly enough to write it.
Email ThisBlogThis!Share to TwitterShare to FacebookShare to Pinterest
Posted by Jessica Strider at 09:00