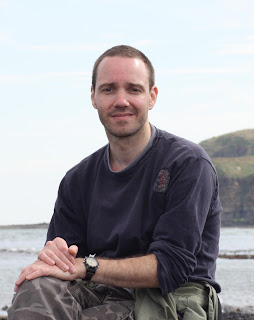 > What is Giant Thief about?


Giant Thief follows the misadventures of down-at-heel petty thief Easie Damasco, who's narrowly saved from hanging at the story's start only to be press-ganged into the army of the invading warlord Moaradrid - an army poised to do battle with Damasco's own countrymen.  Narrowly surviving the ensuing conflict, Damasco escapes by kidnapping a monosyllabic, homesick giant named Saltlick, who's been similarly forced into Moaradrid's service.  Soon both Damasco and Saltlick are on the run, and Damasco - who wants nothing more than to keep his own skin intact - finds himself drawn into a desperate resistance effort.


> Thieves are popular protagonists right now.  What makes yours different?
Truth be told, I didn't pay much to attention to what anyone else was doing when I was writing Giant Thief.  You can tie yourself in knots worrying about whether your story's too similar to what's popular, or whether you've gone too far the other way and written something there's no market for, but in the end, you can't control any of it.  So I'm ashamed to admit that, although I'm conscious there are some great books out right now with thieving protagonists, I haven't actually read any of them.

Funnily enough, though, the fantastic and much-better-read-than-me Adrian Tchaikovsky happened to sort of answer this very question on his blog, Shadows of the Apt.
> You've written a fantasy novel and a large number of short stories in several genres.  What is your favourite genre to work in and do you plan to write books in genres other than fantasy in the future?
I think Fantasy is my favourite, by a slight margin.  I'm starting to get a sense of the scope of it, the range of what can be done, and I'm thrilled by those possibilities.  Horror seems to come most naturally, which perhaps is a little worrying.  I wish I could be a great Science-fiction writer, I think a lot of my best short fiction is Sci-fi, but in the end I just don't know enough science to really go there.
But yes, I definitely hope to write novels in other genres.  The one I wrote between Giant Thief and its first sequel, Crown Thief, is mostly Horror with a little Science-fiction and a hefty dose of Crime thrown in.  The project I was planning when the Giant Thief deal came through is probably best described as Sci-Fantasy. 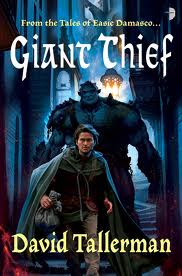 > Beyond the matter of length, do you find it easier writing short stories or novels?
A year ago, I'd have said short stories without hesitation.  Now, I think I'm definitely drifting towards novels.  More than either though, I've really gravitated to screenplays over the last year.  Screenplay writing is a lot of fun, especially when you're collaborating with another writer.  That's an interesting process, and something I hope to do more of.
> What made you want to be a writer?
I don't know that there was any one thing.  I suppose a love of books when I was growing up must have played a big part.  Ever since I was little, writing just seemed like a sound career choice.  I remember trying to write and illustrate a Pratchettesque fantasy novel in my early teens, although I think I only managed about four chapters.  When I was growing up I was always torn between writing and drawing, and I don't remember a time when I didn't think I'd end up doing one or the other.


I remember very clearly when I realised I seriously wanted to be a writer though.  I was living in a crummy bedside, doing a crummy, low paid job, and it finally struck me that I'd been in love with the idea of being a writer rather than the struggle of actually getting on and doing it for far too long.  I had to start making concrete steps towards making writing my life, and through that, my career.
> If you could, would you change places with any of your characters?
No, I don't think so.  I'm pretty horrible to my characters as a rule.  Maybe, just maybe, Doc from the story Dancing in the Winter Rooms.  He ends up in kind of a hopeful place.  Then again, if I'd written on, something profoundly nasty would probably have happened to him.
> What's the first novel (published or unpublished) that you wrote and how long did it take to write it?
Well strictly speaking, my first novel is Giant Thief.  But my first attempt at a novel length project that I actually finished - but that fell short by about five thousand words - was something called Omerta.  It took me six years or so, I think, and it's pretty awful.  There are bits and pieces in it that I like, but writing a Kafkaesque literary novel heavily influenced by the music of Leonard Cohen was probably never going to be a winner.  Looking back, though, the basic plot reads like the basis of a cracking Philip K Dick-style Sci-fi novel.  So who knows, it may be I'll go back to it one of these days.
> When and where do you write?

Anywhere and everywhere.  Crown Thief has been written over four permanent addresses, any number of hotel rooms and countless trains.  When you have a year to write a book in, you learn pretty quickly to write wherever you can set up a laptop.
> What’s the best/worst thing about writing?
Over the last few months, the worst thing I've been finding is what a low opinion many people have of the profession.  It's amazing how often the first response on hearing I had a book coming out was, "So how much did that cost you then?"  It's like the idea of the mid-level author is vanishing in most people's perception.  You're Dan Brown or you must be self-publishing and there's no inbetween.
Meanwhile, the best part will always be the writing itself.  The more it becomes a career, the more just sitting down and creating becomes a luxury.  I've been almost exclusively editing and redrafting and planning since last summer, and I love those aspects too, but it'll be nice to get back to the bare bones work of crafting a story out of nothing.
> What is something you didn’t know about the publishing industry before you had your first book published?
I didn't know that cover artists charge by the character.  Who'd have thought? 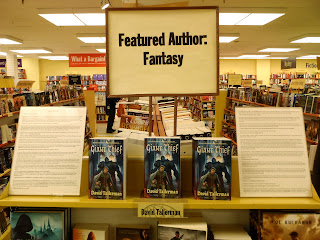 > Do you have any advice for hopeful authors?
For anyone looking to make a career as an author, I'd offer two very contradictory-seeming pieces of advice.  Treat writing like a job, and learn not to think of it as work.
It can take a huge amount of time to write a short story, let alone a really good story, let alone a novel.  Then there's the business of selling your work and self-promotion and networking and editing and getting a website and keeping up a blog and everything else that comes with the territory once you start selling your fiction.  The more seriously you take writing, the more it takes over your life.  And like anything, if you go into it half-heartedly then it's unlikely that any amount of talent will be enough to get you through on its own.  It comes down to the slog of trying to do your best day after day after day and not getting disheartened or compromising.  In that sense, it's best to think of it as a job.  Don't give yourself the luxury of saying "I'll write when I feel like it" or waiting for inspiration to strike.  Whenever you have some remotely free time, use it to write.  Write every day, even if it's only a few words, and build up over time.

On the other hand, it's vital to remember why you're doing it.  After a tough eight hours of mind-numbing day job, it's all too easy to think of an hour in front of the computer as a chore.  But writing should be where you let your subconscious out of the box, where you can let your brain off its leash.  It's not something you do instead of having a life, its where you get to live flat-out.  Think of it as a luxury, and feel a little sorry for your friends who are stuck in front of the telly while you're tucked away doing something you genuinely care about.
> Any tips against writers block?
I'm not sure I believe in writer's block as such.  As other people have pointed out before me, you'd be pretty quick to fire your plumber if they started complaining about "plumber's block", wouldn't you?  But it's true that writing takes a lot of mental endurance, especially when you're working in long stretches, and it's easy to hit a point where something's not flowing and then fixate on that to the detriment of everything else.
Thing is, it's easy enough to avoid.  If you get really stuck, move on to something else.  If a line or a story or an idea isn't working, let yourself back off from it and concentrate your efforts elsewhere.  If you can't write the start of a story, skip on to a scene you feel more comfortable with and write that instead.  Meanwhile, keep a little bit of your subconscious busy chipping away at that wall you've hit and come back when you're ready.

So I guess the tip is, train yourself out of thinking that writing means starting at the beginning of a story and carrying on linearly to the end.  The brain's an astonishing tool for creating, and for multitasking.  But trap it in a narrow alley and it'll never get past the first obstruction.
> How do you discipline yourself to write?
I remind myself that it's what I want to do more than anything else.
> How many rejection letters did you get for your first novel or story?
That's actually trickier to answer than you'd think.  According to my records, the first short story I dared send out (which was by no means the first story I wrote) was rejected about eighteen times.  Then, due to a bizarre mishap, two markets accepted it more or less simultaneously.  As for the novel ... I think I clocked up about fifteen rejections on Giant Thief.  I was very, very lucky in that.
Email ThisBlogThis!Share to TwitterShare to FacebookShare to Pinterest
Posted by Jessica Strider at 11:24